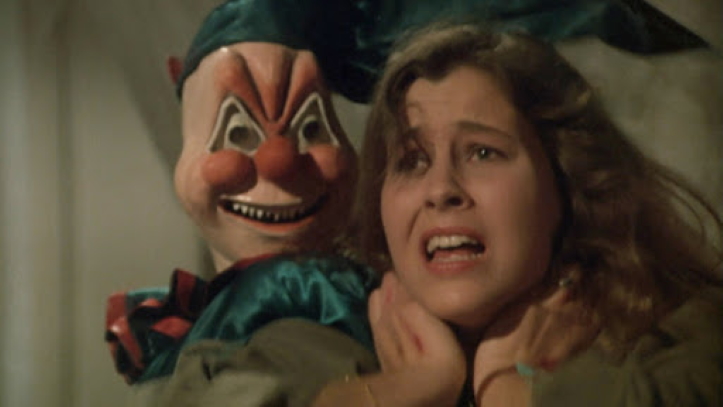 “Save me some chili!”

Justin’s rating: Breaker breaker, do you read me?

Justins review: I’m pretty confident that there’s a movie audience out there that likes the concept of haunted houses well enough yet are too fragile to handle most of the frightening cinematic executions featuring them. To this limited demographic, I present to you Ghosthouse: A haunted house movie that will never, at any point, frighten you. I mean, it totally will puzzle you, annoy you, and try your patience, but scare you? No. No no no.

Some haunted houses get the really great backstories, but Ghosthouse gets a girl who was given some sort of demonic clown doll — please no direct comparisons to Poltergeist, we don’t have the money to fend off that lawsuit — and she turned all murdery and ghosty because of it.

A couple of decades later, HAM radio operator Paul gets a not-really-disturbing broadcast featuring a cry for help and some creepy music. This is the doll’s theme, and it is not winning any Academy Awards for best original soundtrack score, let’s just put it that way. Anyway, as one does when one receives a mysterious radio message, Paul grabs his ambiguously European girlfriend (who is really into chili, this movie wants you to know) and nearly instantly figures out where the message is coming from.

In fact, the ghosthouse seems to be putting out a siren’s call to all sorts of young adults, because a small crowd of potential victims drift its way. Keep in mind that at no point has anyone broken down on the side of the road, been offered a million dollars to sleep overnight, or been trapped in some way. No, every person in this film voluntarily and willingly comes and returns to the ghosthouse multiple times without any suggestion that they have to be there or are being kept against their will. They just figure that if they’re not dead yet, they might as well keep tempting fate.

There’s also a lanky creep who might well be starring in his own serial killer movie just adjacent to this one and a prank-loving hitchhiker named Pepe who even your grandma that says “oh bless your heart” to the devil himself will be calling for his summary execution. Nobody, not nobody likes Pepe, Pepe’s fake corpse hand, or Pepe’s half-eaten candy bar that he offers to people. Pepe is the true villain here.

Anyway, ghosthouse is a good place to visit, as the somewhat spartan abode is infested with the spirit of the dead girl and her clown doll. They do things like make illusions appear, throw pillow dander about, and kill the interlopers with fan blades and milk baths. It gradually comes to light that the girl’s dad was a funeral director who took the clown doll from a dead kid to give to his daughter, which I guess is as good of a reason for a haunting as any other.

As I said, Ghosthouse isn’t scary. It’s a bit bloody, but in completely fake ways, and it’s most definitely acted so poorly as to invite your superior mockery. Nobody in this movie has the slightest shred of self-preservation, although the girls certainly do like to shriek a lot and the guys are way too preoccupied with HAM radio (one of them even has a setup in the back of his pickup truck).

Fun fact: When this was distributed in Italy, it was under the name La Casa 3. La Casa 1 and 2 were a retitled Evil Dead and Evil Dead 2., and La Casa 6 and 7 were House II and House III. That’s our cult connection for the week!