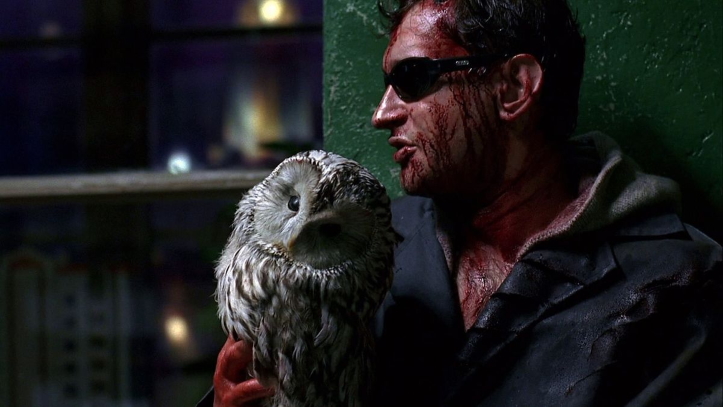 “You want to be human? Then act like a human.”

Justin’s review: At the time of this writing, it’s been a full month since I rented and viewed Night Watch (Nochnoy Dozor in its native Russian) for the purpose of a good review. Typically, I’ll scribble down a review for a movie within a day of seeing it, as it’s still fresh in my senile mind and I am using many of these reviews for paragraph padding in my doctoral thesis.

Yet it’s been a month, and I feel stymied by the lack of inspiration for this review, and it puzzles me. Writer’s block? I don’t think so. Middle of the road execution? Doubtful. Heartburn? Maybe.

I think it’s mostly likely because Night Watch is both a film that’s difficult to recommend and difficult to disavow. I usually put movies I see in one of four categories: really good, really bad, middling blah, and hard-to-place. This last category causes a lot of trouble in reviewing circles, because some movies are clearly inspired in some way — be it brilliant storytelling, exceptional acting, unique ideas, creative special effects — but are at the same time hampered by some serious missteps that would cast a lesser movie into oblivion. It all depends on how much the audience is willing to forgive in order to glean the great from the film.

Night Watch’s effects are nifty and acting is adequate (side story: I saw a magician last weekend whose whole catchphrase revolved around being “just adequate”, which is a wonderful aspiration for a practitioner of parlor tricks), but the whole concept of this first part of a proposed trilogy was meaty enough for me to take a bite.

It seems as though, a while back, the forces of good and evil arrived at a stalemate in battle, and agreed to a truce to allow both sides to live in relative harmony. People born with or developing supernatural powers would become Others, the soldiers of this unseen war. The good Others are slated to rule the daylight hours, but overseen by the Day Watch to make sure they weren’t going outside of their bounds; and the bad Others are masters of the evening hours, kept in line by the Night Watch. So vampires and shapeshifters and telepathic Dudley Do-Rights walk the same streets, and their kids sometimes face off in a particularly vicious round of Little League Soccer.

However, it’s not a great day in the world for the good guys, as dual threats seem posed to destroy the balance. A massive Vortex of bad wishes and bedwetting opens up above Moscow and threatens to engulf the world, at the same time as a young child with untapped Mighty Powers is being chased after by both sides in order to tip the power struggle in their favor. Along comes Anton, doo dee bop be dop, a good Other with a dark past and a special ability to track down rogue Others psychically. As a licensed member of the Night Watch, Anton and his pals rush along trying to solve both of these problems while wondering who failed to pay Moscow’s electricity bill in this grimly-lit flick.

Night Watch took Russia by storm, and was eagerly awaited overseas. When it came, many pre-packaged fans stumbled over the movie itself, wanting dearly to love it yet not blind to the scatter-shot approach of dealing with a mythology this complex. You have to understand that Night Watch contains about six full-length novels’ worth of backstory, ideas and characters but has to rush along so quickly as to only give us a cursory glimpse or explanation for each major idea. As in movies which lack even one good idea, sometimes it’s equally bad to have dozens of them yet fail to properly explore them. We’re left, as an audience, to fill in the blanks ourselves and make gross assumptions of what’s going on and what that means and why little dolls are suddenly morphing into freaky spiders. To be left with a cliffhanger and the promise of two sequels yanks away any closure we received.

Do you sense my frustration at being impotent in dealing with this movie? Do you have any Tums?

Many people have accused Night Watch of kow-towing to the Hollywood big budget excesses; it’s a movie that wants you to think its cool so bad that it strains so hard on giving you cool stuff to look at that it doesn’t notice that it’s sweating in its hot pants. Granted, the visuals are tremendously innovative (such as a fight where Anton has to battle it out with two vampires that he can only see through a shard of a mirror), and they don’t let it drag out into a lame ending, but that only carries the weight so far until something has to give. Golly, I do love mixing my metaphors.

Speaking of balance, I suppose that in the end I must nudge things over to the “grudging approval” side of the spectrum, and release the filmmakers on the condition that they’ll actually slow down a tad and explain things in the next film, or at least give us a college textbook suppliment to understanding this universe.

And just in case you were counting: I didn’t hate the vampires in this movie. That makes two films so far.

Shalen’s review: If there’s anything this movie makes me want to do, it’s find and read the books. The translation of the dialogue from Russian to English was very deft*, and one would hope it would be possible to find such a version of the printed works as well. As Justin mentioned, the movie obviously touches on a deep and complex universe that the viewer is only dimly likely to grasp.

I feel like I need to watch the movie about five more times, too. The ending wasn’t exactly satisfactory, what with the inconclusiveness and obvious sequel setup, but there’s so much detail here that I know I’ve missed on the first viewing. I didn’t even notice the scars on one character’s back until I was going back through it looking for screenshots**. And neat, inexplicable tidbits are all through this. I get that Olga was turned into an owl, but why was she stored in vacuum plastic as a stuffed animal? And there’s the interesting fact that the Night Watch and Day Watch are named, not for their alignment, but for whom they are watching. There’s the fact that the Night crew are going around in a beat-up yellow ambulance while the dimly-glimpsed Day folk drive nice cars and wear designer clothes. There’s the curious suggestion of tournament video games as a precognitive device. And so on.

I think at the very least this film deserves a look-see. I understand at least one Russian group lambasted it for its use of “Hollywood” film techniques, but honestly there’s plenty here that Hollywood wots not of — a good example being that there’s no conceivable way Olga’s transformation scene would not have resulted in a) full frontal nudity and b) probably a sex scene afterwards had this been a true Hollywood goth actioner. This film is far from obsessed with vampires as sex objects, another big difference***. And the fact of one character’s being a virgin is not dealt with promptly by her ceasing to be one, which is impossible to avoid in a movie made in the United States without straining the fabric of the universe. All this may, of course, be to do with a more censorious attitude toward filmmaking in Russia, but the film’s tone is much more exploratory than exploitative when it comes to everything except the blood. There is lots of that, and it is drippy, which this has in common with the last movie I reviewed for this site****.

This makes a nice change from the usual approach to gothic fantasy filmmaking, bitsy and monochromatic genre that it is. I’d say give it a look and you won’t be sorry.

*Unless for some reason it was actually MADE in English. In which case, oops.
**This being before I realized Justin had already reviewed this movie. Oops again.
***Also an interesting reversal of lore: vampires can voluntarily make themselves invisible, and can afterwards ONLY be seen in a mirror.
****Rise. It’s lousy. Note lack of any vampire-related pun on the word “sucks.” This is how you know I’m not a real film critic.