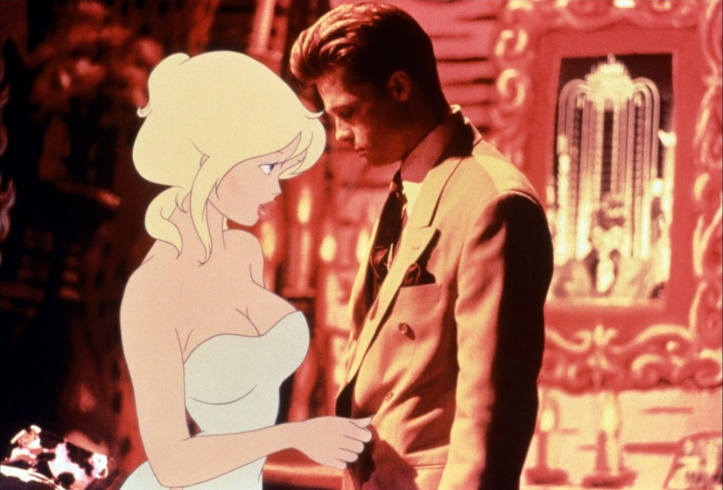 “Noids do not have sex with doodles.”

DnaError’s review: Watching Cool World is a lot like eating an entire bag of chips in one sitting. You know you shouldn’t do it, but you enjoy it anyway. Cool World is a guilty pleasure without all the greasy fingerprints. The feeling is probably because this was the first movie I ever saw that was downright dirty. Full of violence, naughty language, a sex scene… and all when I was a wee lad and my Mom foolishly thought that it was a kid flick.

Cool World was animation legend Ralph Bakshi’s attempt to subvert the genre once again with a ribald, adult version of Roger Rabbit. The plot concerns the voluptuous toon Holli Would (Kim Basinger) trying to seduce the creator of Cool World (a very sweaty Gabriel Byrne) so she can get out her cartoon prison and into the real world. Brad Pitt in a very early role also appears, sporting the ridiculous hairdo since Johnny Suede.

Animation quality wanes, the characters can be really good, or really bad… but the ultra-stylized backgrounds are something to look at. The movie may not be the funniest Bakshi ever did, or the most controversial (which is really a shame, since Bakshi’s former works are hilariously crude satires). Anime would own the whole cartoon-sex-and-violence thing, but there is something endearing about it.

The animation isn’t slick or polished or carefully stylized and marketed. You don’t get the feeling that the movie is trying to sell you a whole line of toys/clothing/backpacks/videos/soundtracks/lamps/bedsheets/underware/snack packs/lifestyle. It’s just one guy and a small team creating a very weird, very offbeat cartoon that is about as far away from traditional American fare as possible.

But like I said before, it’s an odd, acquired taste. I’ll admit it’s not nearly as funny as it SHOULD be, (although a scene with a very cute, and very violent bunny is gut busting) and the plot gets really twisted and long winded at the end. Yet, despite being almost universally planned by critics, audiences, and household pets, I still have a small, dark piece of my heart for Cool World, probably coming from the rush of watching something you’re not supposed to.