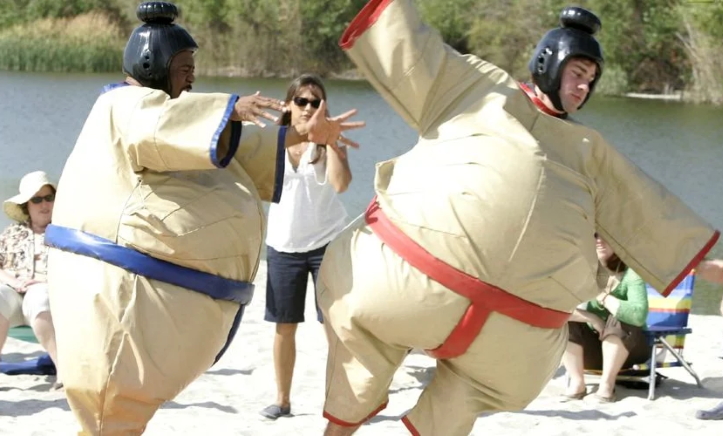 By the time the third season of The Office (2006-07) came around, the show was in a great place. It was blowing up in ratings, getting award nominations, and finding a sweet spot for the sometimes-infuriating, sometimes-endearing Dundler Mifflin regional manager Michael Scott.

But the season also began in a pseudo-divorce: At the end of the second season, Jim finally declared his love for Pam, they kiss… and then Pam rejects Jim. This prompts Jim to up and leave Scranton for the Stamford branch, splitting the show’s storylines in twain for the first seven episodes. In Stamford, Jim encounters new antagonist Andy (Ed Helms) and starts flirting with Karen (Rashida Jones). Jim’s still kind of missing his old friends — even Dwight — and is doing his best to heal from the pain of Pam’s rejection.

It’s a very interesting place to start the season, and I applaud the show runners that they kept the Scranton/Stamford split going as long as they did. Ultimately, there’s a merger, and Jim does return (along with Karen and Andy), and the romantic tension between Jim and Pam begins to simmer once more.

Season 3 is full of classic episodes and hilarious moments as this slightly deranged work family goes through some very atypical office experiences. There’s a whole heck of a lot of character development that happens in just the span of one season, too. Oscar is outed as gay, Phyllis gets married, Michael gets dumped by Carol, Michael starts dating Jan, Jim and Karen attempt to have a relationship, Dwight is fired, Pam grows more confident in herself, Ryan tries his hand at sales (to little avail), and Andy shows that he has extreme anger issues.

I am not generally a fan of Karen, but not because she’s competing with Pam for Jim’s heart. It’s mostly because I don’t think that Jones is really that good of a comedic actress and tends to fade in comparison to the rest of the ensemble (a problem that she had in Parks and Recreation, too). Andy, however, is such a great addition to the cast who brings a snobby yuppie vibe with a lot of quirks and a rivalry with Dwight.

When I go back and watch through this season, it’s definitely still in the early Office era to me. The supporting ensemble isn’t as pronounced or crazy, and a lot of the stories are more centered around the mundanities of the office (meeting new coworkers, covering up for mistakes, negotiating for pay raises, etc.).

It’s also strange to consider how little time in the overall run of the series that Pam and Jim actually weren’t together as a couple — just three seasons (well, two-and-a-half). There’s a kind of enjoyable tension between the two that gets flipped for Season 3, because now it’s Pam really wanting to be with Jim while Jim’s with someone else.

Season 3 did show some growth and change in a few significant ways other than personal storylines. There was more of an effort (and budget!) to take the cast out of the office, so we get a wedding, a “beach day,” a trip to Ryan’s business school, a cocktail party at David Wallace’s house, and a memorable lunch at Benihana.

It’s a really solid season with only one episode — Phyllis’ Wedding — that I find very hard to watch. So let’s do a couple of Top 5 lists to round this piece out, shall we? 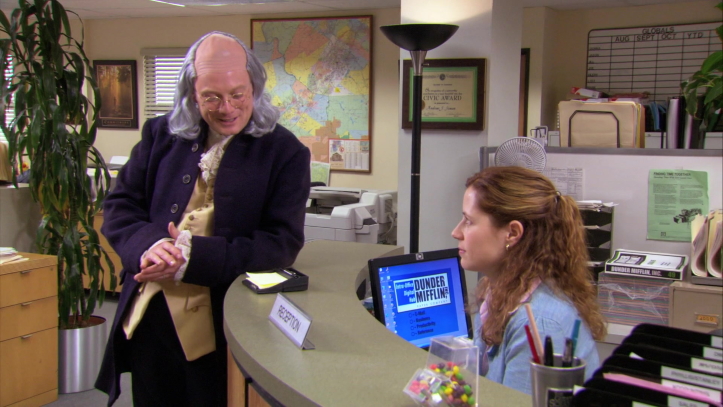 Michael does a whole lot of performances for his staff in the run of the show, but Prison Mike has to be among his very best. Trying to “scare them straight” about the facts of incarcerated life, Prison Mike talks about gruel, the Dementors, and how attractive Ryan would be to everyone in jail. The whole speech and ensuing Q&A is a series classic moment.

I don’t see this moment referenced a lot, but for me, there’s no line that makes me laugh so hard in this season as when Dwight describes how to properly butcher a goose to a bewildered waitress at Benihana. “Hold its neck back, insert the knife beneath the jaw, and bring it all the way around. There’s going to be a good amount of blood, but don’t let that bother you. Have a bucket there for the blood, the innards and the feathers.”

Beach Games has so many incredible moments — Pam’s fire walk, Andy floating out into the middle of the lake, Team Voldemort — but nothing tops the moment when Stanley roars and charges at Jim, both while wearing sumo suits. Stanley is normally so sedate that to see his fury unleashed (over a possible job promotion), it’s amaziiing.

OK, I have such a hard time watching Phyllis’ Wedding because it really dogpiles too hard on Michael. However, I can’t deny that his whole attitude during the wedding was hilarious, from dragging the wheelchair down the aisle to trying to ONE-UP THE MINISTER by pronouncing the couple married before they finish the “I Dos.”

The two-parter The Job seems to stretch out an epilogue to Beach Games too much, but there is at least one momentous occasion. At the very end, we find out that Jim’s turned down the job from corporate, broken up with Karen, and returned to Scranton to finally ask out Pam. Pam’s overjoyed, wordless smile into the camera is one of the best moments in the series. 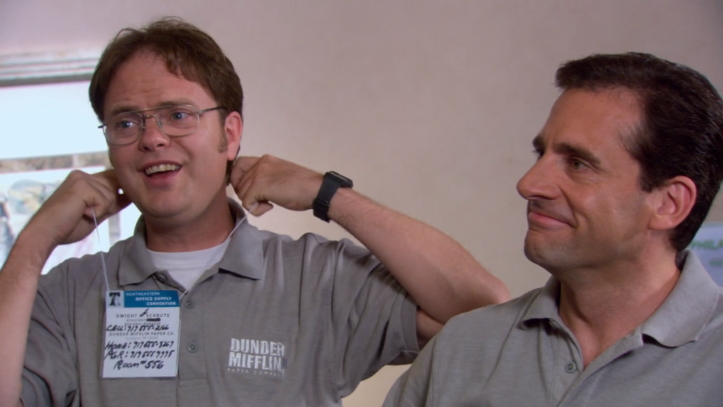 Beach Games definitely is my favorite episode of the season that feels like the finale in a way. There are a lot of plotlines that come to a head in this seemingly innocent work outing to a forlorn lake beach, including Pam’s unrequited love for Jim, Michael’s impending interview for a promotion, and Angela’s revenge on Andy for getting Dwight fired. So many of the cast gets a great moment or two — even Toby, who is left alone at the office in his beachwear and flipflops. I also loved the cast singing “The Gambler” and “The Flintstones Theme” on the bus.

The truly great Office episodes tend to be the ones where the A and B stories both shine, as they definitely do here with Business School. To get a higher grade in his class, Ryan invites Michael to come give a talk at his school. This turns into a disaster as Michael rambles on and ultimately turns on Ryan for being disloyal toward Dunder Mifflin. But perhaps even better is the B story with a nervous Pam who participates in an art show for the first time. She doesn’t get the support she needs from her coworkers or boyfriend — but then Michael comes in and absolutely makes her day by buying her painting.

After Andy puts Dwight in a position to get fired/quit, Michael discovers that losing Dwight is one of the bigger mistakes of his life. “The Return” here refers both to Dwight’s return and the return of Oscar for the first time since the season premiere. It’s also pretty notable for Jim pranking Andy so hard that Andy loses it and is sent to anger management after punching a hole through a wall.

A boring safety training session for both the warehouse and upstairs office ends up rankling Michael, who is accused of living a cushy life. Michael then tries to stage a suicide jump into a bouncy castle to get respect back from the warehouse and… yeah, it’s a whole lot of silliness, but it’s peak Mike in many ways. My favorite part is his insistence that he can handle the deadly bailer downstairs even as people repeatedly tell him he can’t and shouldn’t.

Cocky Ryan — now a salesman — is taken under Dwight’s wing on a sales call. Only Dwight decides to put Ryan through a very strange initiation process that culminates with a wrestling match with Mose in the Schrute farm barn. It’s also the episode where “Pretzel Day” happens at the office park, which is a Big Deal to Stanley and Michael. Really good all-around outing for the show.