Welcome back to ’80s Couch Surfing, a series in which I watch and review a sampling from a 1980s TV show. Today’s entry is Silver Spoons (1982-1987) in which a childlike tycoon has to share his man cave with his uptight son.

Going back to watch ’80s sitcoms and cartoons, I’ve come to realize that a good deal of them engaged in giving us kids a way to vicariously experience situations we could only dream about. Mostly, that meant either having a crapton of money or having superpowers but having to hide them from your significant other so that they won’t be weirded out and will still take you to the prom. Silver Spoons was definitely in the former category, with child actor Ricky Schroder playing, er, Ricky, a kid who gets to live with a fabulously wealthy dad who has collected every item from the Toys ‘R Us Christmas catalog.

I wasn’t the most devoted viewer of Silver Spoons when I was a kid, but I remember it being passably interesting, if only to really hone that sin of envy that lurked inside my chest. For today’s outing, I’m going to chew through two episodes from the first season.

Oh man, that theme song. It’s so ’80s: sappy, sentimental, clocking in at about a minute, and distressingly catchy. It’s definitely a shot of pure nostalgia; I can close my eyes and imagine being a kid watching this on my parents’ bed with their 10″ black and white TV.

Anyway! The episode! It’s obvious why I picked this one, isn’t it? If there’s going to be a Mr. T, I have to be present. He was one of the premier mascots of the 1980s, a fad that came in the form of a very large mohawk’d man. Honestly, I could’ve watched an entire episode with just him sitting on the couch making faces.

But instead, we get Edward (Joel Higgins) starting the day by sending his kid to public school in a limo with $100 for milk money (and a cookie!). He then dictates a rejection letter to an entrepreneur who wants to open a fast-food chain selling fried robins. It got the first laugh of the episode from me, especially when they committed to the bit with a prop “Bucket ‘O Robin.” His secretary, Kate (Erin Gray), is clearly a romance in the making that we’re not going to get into too much because the only way it would’ve been exciting is if Kate revealed that she was actually Col. Wilma Deering from Buck Rogers on a deep undercover mission in the 20th century. 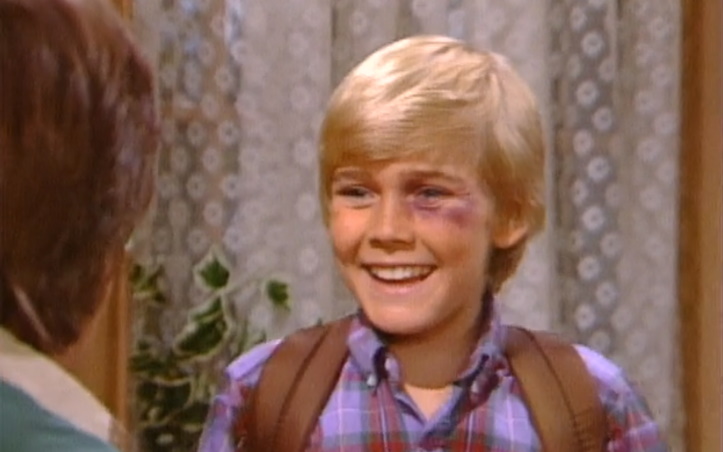 Ricky comes home from school with a black eye, at which point we learn that he’s been beaten up for being a rich kid. Clearly, this show was helping us to foster a deep compassion for the one-percenters. He’s so weirdly upbeat about getting bullied, laughing and cracking jokes. You know, like all kids do when they’ve been brutalized at school. But Ricky’s acting like that because he wants to make it at public school on his own terms without interference, so he gets permission to handle it by himself.

Kate offers Ricky some self-defense ideas. He agrees, and she goes, “Here, take my rape whistle and blow into it when you’re attacked!” My jaw was on the floor and a second later I was laughing my head off at how… terribly funny (and I meant that in both senses of the word) that line was. Grey shows some good comedic chops with that delivery, and I’m sincere here.

At school the next day, the kids are alone in a classroom (because the teachers are on a smoke break? I’m guessing?) and the bully comes in to collect everyone’s milk money. Ricky declines, and it looks like “Ox” is going to pound him in three… two… 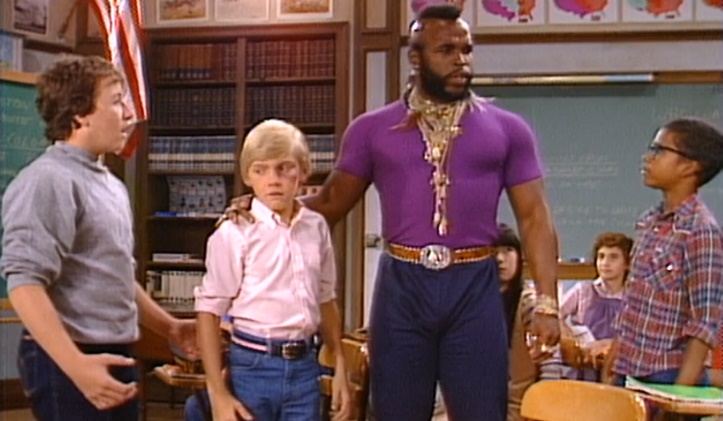 That’s when Mr. T kicks open the door and bursts into a still-teacherless classroom to announce that he’s Ricky’s personal bodyguard. You can just see Ox poop his pants on the spot while the audience pees itself trying to holler loud woops of approval. “I don’t want a bodyguard!” Ricky protests. “Hey kid, this isn’t the thrill of my life, either,” retorts Mr. T. So Edward hired this well-known actor to barge onto school property and threaten a bully? I guess you could get away with this sort of thing back then.

The teacher FINALLY shows up and confronts this angry man in her classroom: “I’m afraid you’ll have to leave.” Good. Succinct. Well-put. 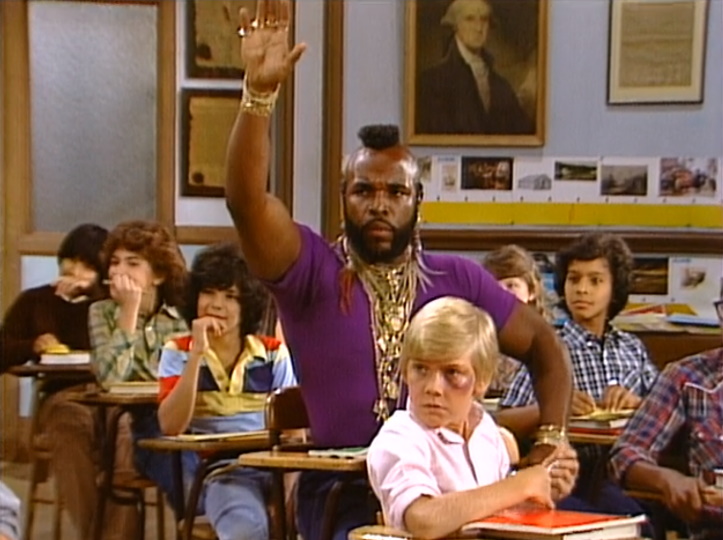 Honestly — and I say this with all sincerity and not a shred of sarcasm — this whole scene is hilarious. Mr. T nails every one of the short lines he has, and I kept laughing out loud at things like how he’d tell Ricky to turn around and face front while he loomed over him from behind. I’m just amazed that all of the other child actors here didn’t lose it (although you can see several of them getting close to breaking). My favorite part was when Mr. T gets into the history Q&A session and excitedly wants to answer questions about the USA’s formation.

This show made so many kids run up to their parents and breathlessly say, “I know what I want to be when I grow up! I want to be a powerful tycoon who gets to play fooseball whenever I want!” Honestly, I’m not exactly sure how Edward actually runs his company, since he stays at home all the time and loafs off for most of it. Maybe he’s been ousted for years now but the company set him up with a fake secretary who is actually his handler to keep him from seeing through the facade.

So Ricky’s all ticked off at his dad for sending Mr. T into his school and “humiliating” him. I don’t know what universe this kid lives in, but if my dad sent Mr. T to visit my class and hang out with me, I’d be popular for life.

I love that there’s this running joke that Mr. T is really good at history — he got 100% on the exam.

In a genuinely good scene, Mr. T tries to intimidate Edward, but Ed doesn’t back down. That makes the dad realize that he does, actually, need to let his son fight his own battle here.

And then the scene gets even better — and I’m still not being sarcastic — when Eddie talks to Ricky and says, “I know I didn’t handle this very well, but I’m kind of new at this father stuff, you know? I’m going to make mistakes some time. I sure hope that you’ll have an awful lot of patience with me because I only make them because I love you.”

Dang. Silver Spoons, writing the book on awesome parenting, there. 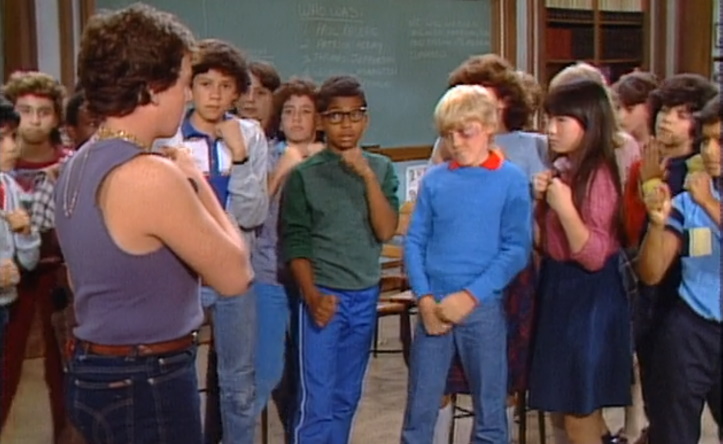 The episode ends with Ricky convincing the whole class to stand up to Ox. There’s even a bit of punching and stunt work here, which is a little jarring, but way to go out strong! 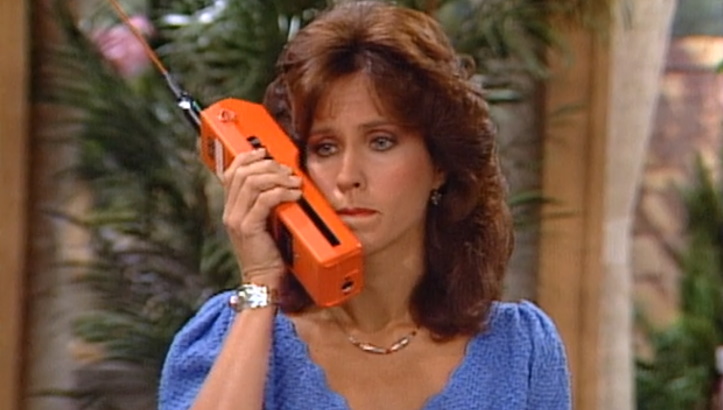 Since only the first season is on Amazon Prime Video, I’m going to jump ahead to the seventh episode — which has an ASTOUNDING CROSSOVER EVENT. But we start with Kate holding the world’s largest walkie-talkie and play acting with Eddie. My theory that she’s more of a babysitter than a secretary continues to take shape.

Ah yes, the Stratford house train. This train was the number one reason anyone watched this show, because how cool was it to have an actual ridable train choo-chooing through your house? These actors clearly loved it, too. 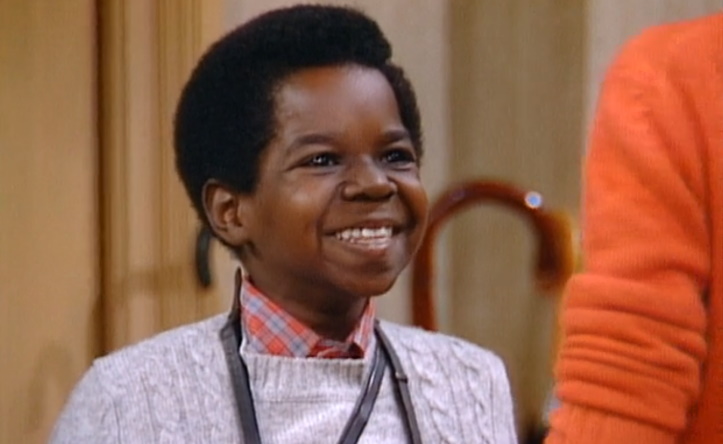 Anyway, a reporter shows up to interview Ricky about his leet computer skillz — and the reporter is no less than Diff’rent Strokes’ Arnold, played by Gary Coleman. Now THERE was a show I watched a whole lot of, for some reason. It feels like this episode is significant because both Coleman and Schroder were considered to be two of the best child actors of the ’80s.

In any case, Ricky shows off the family computer (kids, this was back when computers were huge and households only had a single one). I love the cassette player loader in particular. Anyway, Ricky makes a big deal out of “visiting” — a term I don’t think anyone used for dialing up other computers.

Naturally, he uses his “visiting” skills to hack into a military computer and take a picture of a super-secret stealth fighter for a sixth grade newspaper. Keep that picture in mind, there, because it’s about as detailed as anyone might draw in a very early version of photoshop. 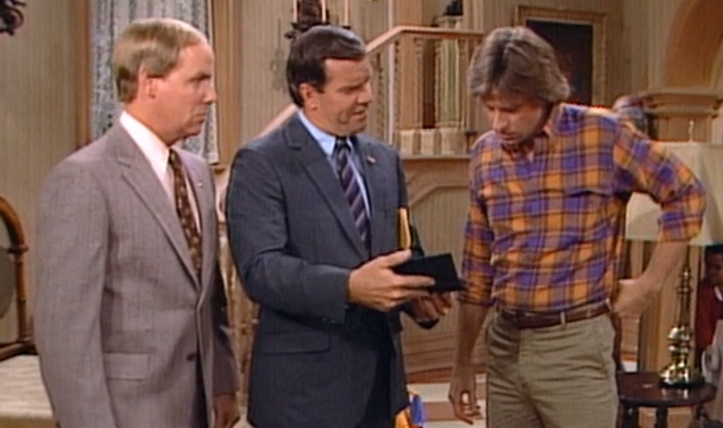 But it’s Serious Business, apparently, because this little school newspaper draws the attention of the FBI, which barges into the house with a search warrant and talks about how this is treason and might warrant the death penalty.

“I don’t want to be the first guy who needs a booster seat on the electric chair!” Arnold says to Ricky from a hiding spot. Gary Coleman was always game to make fun of his lack of height. Good sport. 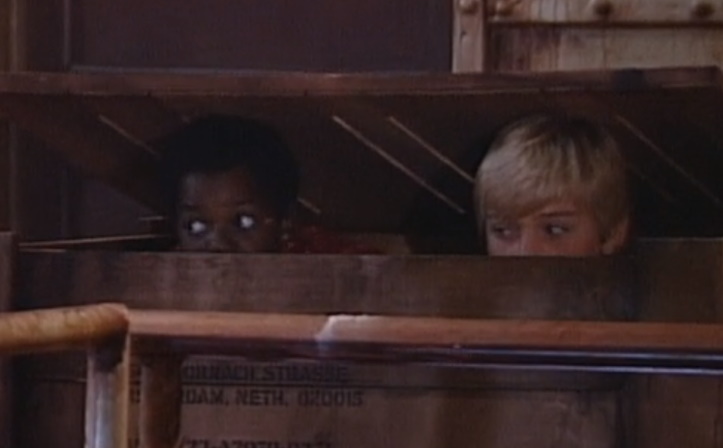 Naturally, Ricky and Arnold decide that the best course of action is to flee upon a merchant steamer. There’s a long scene of them hiding out — and being discovered on — a rusty boat. The captain agrees to take them on as cabin boys (cue uncomfortable shuffling from a viewer in 2020), but he’s really trying to get them to go back home by telling them stories of never seeing his own family again. The kids go back and the FBI lets them off pretty easy. It’s really weird that Arnold’s dad didn’t come over to be a part of all of this, but guest star budgets being what they are, I guess I can understand.

There are three things that tickled me in this episode. The first was the aforementioned train. The second was the fact that one of the FBI agents kept getting distracted by all of Eddie’s fun toys. And the third was a moment when the boat captain was listing the names of his crew and he said “Peeping Tom,” the above picture of a skeezy dude popped up in a porthole.

So that’s a Silver Spoons sampling from season one! And you know what? Both episodes were pretty darn good. Sure, they have that stilted ’80s sitcom way of acting, but it’s certainly far more entertaining than Out of This World or Small Wonder.