Back to the Future: The Ride

Let’s face it: If you’re hoping for Back to the Future IV to happen… it’s not. It’s just not. The trilogy wrapped itself up nicely and neatly, the principal actors are getting up there in age, and nobody wants to see a movie about Marty McFly’s daughter and Doc Brown’s eccentric niece team up for a time-hopping adventure. Wait, I might be wrong on that, that does sound pretty awesome. But yeah, chances of a fourth film continuing on with Marty’s adventures are pretty low.

That said, there are options if you want to keep the Back to the Future experience going. There was an animated series in 1991 and 1992 that loosely continued with the saga (and involved Christopher Lloyd in live action segments). Telltale Games put out a pretty decent Back to the Future five-part series in 2010 and 2011 that also served as a sequel (and also involved Lloyd’s voice work). And there’s a short 2015 film that we’ll discuss some other time.

But if you really want to get the closest there ever was to a true filmed Back to the Future IV, you’ll need a time machine yourself to go back to Universal Studios back in 1991, when Back to the Future: The Ride opened. This $40 million motion simulator was supported by Steven Spielberg and starred Christopher Lloyd as Doc Brown and Thomas F. Wilson as Biff Tanner (Alan Silvestri also returned as the composer). After going through the pre-show, visitors would board an expanded DeLorean and go on a chase after Biff in order to restore the timeline that he disrupted.

The whole film — which combines the pre-show movie and the actual ride experience — clocks in at a not-too-shabby 32 minutes and is still out there to watch (if not to ride). So today, let’s take a trip through Back to the Future: The Ride and watch it as we’d watch anything else here on the site. Detached from the motion simulator, is it an enjoyable experience in its own right — or should this be buried in the annals of time?

As the pre-show begins, a receptionist welcomes viewers to Doc Brown’s Institute of Future Technology. If the receptionist looks familiar, she should: the same actress (Darlene Vogel) played Griff’s gang member Spike in Back to the Future Part II.

The pre-show itself is… well, it’s a whole lot of filler. It’s the kind of thing you’d gladly watch if you were stuck in a line in 1991 without any smartphones to keep you entertained, but we’re talking about 25 minutes of treading water. There are clips of the movies shown and narrated over as if it was a documentary, some hilariously bad early-’90s CGI of the Institute, and some newly filmed bits with Doc Brown. He talks of the audience as “volunteers” who he’s going to send forward a day in time for some reason. He does mention that Biff Tannen disappeared from 1955 and that everyone should be on the watch for him.

There’s a pretty clever little segment where Doc Brown is shown flitting about through history and meeting all sorts of famous people (such as Thomas Edison) and being present for big events (such as the Kitty Hawk flight). It’s like those Forrest Gump history-meets-fiction splices, just with much less Marty McFly.

In another one of the live segments, Doc Brown broadcasts from Hill Valley, 2015, to announce that Biff (somehow) got out of his time period and is on the loose. I’m barely listening because I’m just checking out the set dressing and costumes that look like they were cobbled together from whatever props were leftover from the second film. There are also bits of him futzing about in the lab, showing off various inventions. More fluff, more fluff. I feel like I’m waiting in line myself… waiting in line for the movie to actually start.

Hey, it’s Biff, showing up 15 minutes into the pre-show! He’s wandering around the Institute mugging for the camera in his 1950s getup. “What are you lookin’ at, butthead?” he barks at the camera. OK, this all might be worth it just to hear that line again. Also, he throws marbles at the security team and says, “Have a nice trip, see you next winter!” “FALL you idiot!” yells the guard before he experiences head trauma firsthand. 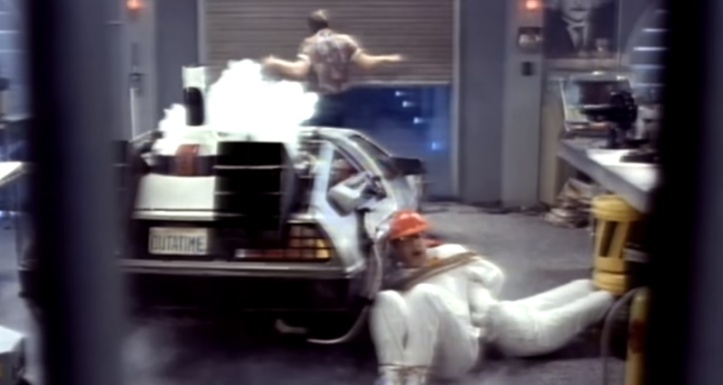 Biff finally locates one of the DeLorean time machines and starts to steal it. Apparently one of Doc Brown’s time teams went to 1955 and Biff stowed away in the car (how? that thing has no spare room!). Doc’s freaking out about wanting to get him back to 1955 to avoid creating a “major paradox,” but as far as I see, there’s only one Emmet Brown in the scene.

Sorry, I’ll show myself out.

Anyway, as the pre-show comes to a close, Doc Brown determines that by sending his new eight-passenger DeLorean convertible after Biff, there’s a chance that ramming the two cars together will somehow set things right. Just go with it. And here we start the ride!

Doc pilots the car remotely, which seems a little cruel to the eight time travel novices that he’s sent in his stead, but nevermind. The new DeLorean has the ability to track the other one through time, so this is basically a high-science game of tag.

First stop is 2015 (again), and Biff has some difficulty getting the hang of fly-driving — but he still evades the new car. There are a lot of great models of the futuristic suburbia and a lot of blink-and-you’ll-miss-em references to the second film (such as Jaws 19 and the new Pepsi logo that I can’t help but notice never actually became a thing back in 2015).

Next up is Hill Valley during the last ice age, which kind of seems uninventive to me. I guess it was cheaper to make a lot of generic icy canyons, but all it makes me think of are those arcade roller coaster simulators that serve as museums for what CGI looked like two decades ago. All during this, Biff and Doc bark lines at each other over video, but it’s nothing too noteworthy.

Then we’re back in the time of the dinosaurs — or, to be more accurate, very badly stop-motioned dinosaur puppets. After the 2015 segment, I kind of feel like we’re just hitting generic time periods rather than the detailed ones of the movies. At least Biff is having a good time.

That is, until Biff’s flux capacitor goes haywire and he falls into a lava flow. At the last second, both cars bump and send them back to the Institute in 1991.

“You saved my life… butthead!” Well, that’s Biff for ya. And with that, the ride comes to a close.

OK, to be honest, it just doesn’t work well as a film or a piece of watchable entertainment. Still, it was probably a fun ride, and for the Back to the Future enthusiast, it does offer a nice jolt of history. I think it’s a shame they couldn’t get Michael J. Fox back for this or were able to do anything more with other versions of Hill Valley, but clearly they blew a lot of the budget on the futuristic 2015 sets.