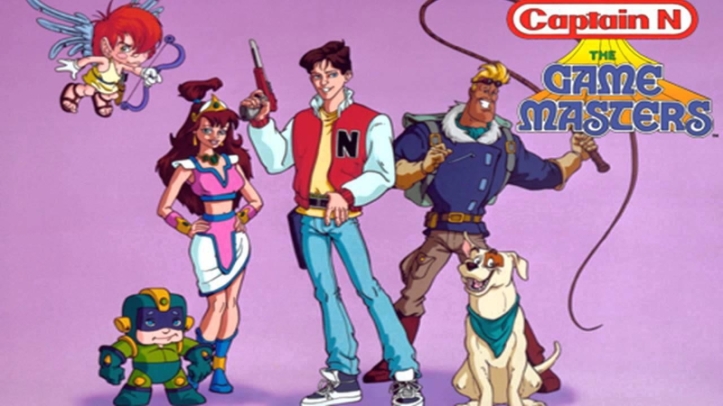 Welcome back to ’80s Couch Surfing, a series in which I watch and review TV episodes of various series from the 1980s. Today’s entry is Captain N: The Game Master (1989-1991), in which a kid from our world is sucked into “Videoland” to adventure through many of Nintendo’s game properties. 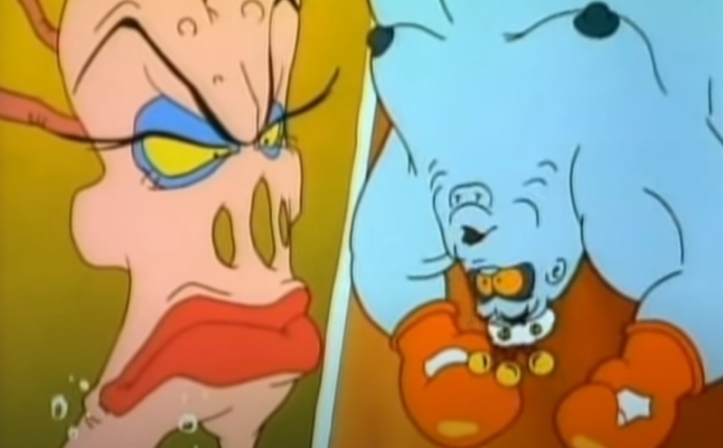 Around 1989, pretty much all of us kids were obsessed with video games. The Nintendo was the gold standard and the console that got the most discussion at school recess and while we were hanging out in our neighborhoods, so it’s understandable why we started to get video game cartoons in the late ’80s as well. My show of choice was always Captain N because of the game variety and also I had a thing for the princess but we won’t talk about that here. It’s a pretty silly premise and a blatant commercial for Nintendo, but, hey, I liked it.

So let’s see how this series began with the pilot episode here. A narrator tells us that it’s dark times indeed for Videoland, as Mother Brain’s armies have besieged the Palace of Power for “many years.” Several years? Seems like either Mother Brain’s army is pretty weak or there’s just no pressing issue for the good guys. As we’ll discover, this show’s cast is selected from Nintendo’s most well-known games at the time, including Metroid, Punch-Out, Megaman, Castlevania, and so on. Zelda and Mario had their own show, so they didn’t show up much here (if at all).

Princess Lana, showing a shocking amount of skin for a kids’ show, mourns that the Palace of Power is about to fall and there’s no hope. I don’t think Lana is from any specific game series but rather “typifies” the princess archetype in many video games. Her associates are Megaman, Simon, and Kid Icarus. I’ve always been disappointed that the show portrayed Simon as this vain buffoon because I think he’s one of the coolest heroes from games in that era. He should’ve been the protagonist.

Out of the blue, a talking power glove (it’s so bad) lights up and starts yammering about a prophecy of someone from another world who would come save Videoland. It then opens up a giant portal to another dimension — you know, as gloves are wont to do — and sucks in some slacker teenager named Kevin and his dog. 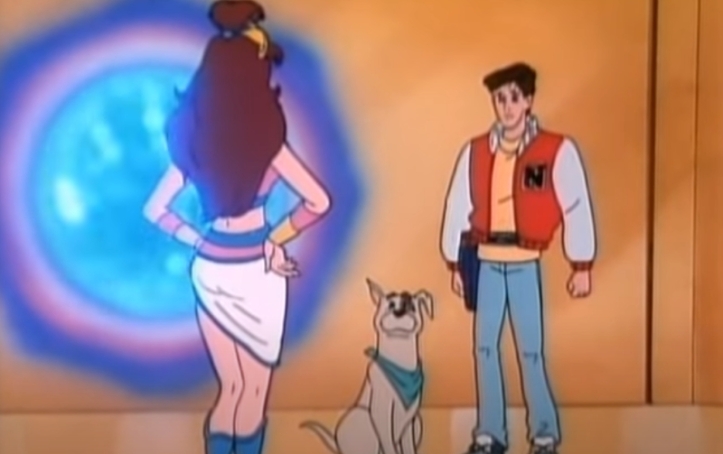 Kevin comes through with two important accessories that any NES player would know well — a controller belt buckle (which could make him jump super high, stop time, or run fast) and a light gun zapper. He, of course, immediately falls in love with the princess, sending the message to teenage boys that if they played enough video games, eventually one day a hot girl would summon them into one and live happily ever after. Kevin tries to go home, the warp zone disappears, Simon keeps making passes at Lana, and Lana goes off to mope. It’s Oscar-worthy writing.

Other than the mild jolt of nostalgia, the only thing I’m really enjoying so far is the design of Mother Brain. A disembodied brain in a jar with eyes, a mouth, and tentacles is not your standard cartoon villain, but they have a lot of fun making her this over the top cackling mastermind. Makes me wish Samus was on the side of the good guys, though.

King Hippo and Eggplant Wizard smack their way into the palace… somehow… to kidnap the princess and force her to surrender. I have to ask, am I the only person who is deeply unsettled by Hippo’s gigantic nipples? Put a shirt on, man. Or a bra.

Kevin tries to save Lana, but he’s slow on the quickdraw. At least the above moment looked pretty cool. Cinematic-like. Anyway, Lana is kidnapped and the rest of the good guys start bickering about what to do.

Here’s something I had forgotten: Kevin’s controller had a limited number of charges, so he couldn’t keep using it all the time. I don’t think the show was ever consistent with counting its use but would only bring it up if he was out of gas.

As the good guys head off to planet Metroid to rescue the princess, the show uses a quiet bit of that game’s soundtrack. Nice touch. But they end up in Kongoland (Donkey Kong), where all sorts of action happens trying to evade the angry beast. Kevin uses his controller several times and mentions his extensive knowledge of video games even more often. I can just imagine kids back then trying to use this show to back up arguments to their parents that gaming knowledge is an essential life skill. 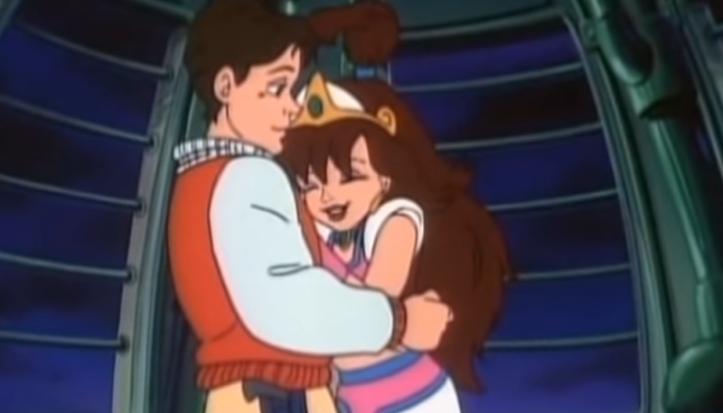 “We’ve got to work together as a team!” Kevin says moments before he breaks into Lana’s jail cell by himself and wraps her up in his beefy jock arms.

There’s a final action sequence as Lana and Kevin run a gauntlet through the corridors of Metroid. I like how whenever Kevin zaps a critter, they pixelate before disappearing. But all that shooting finally depleted his controller (and, I guess, his zapper too), requiring the rest of the team to come in and stop Mother Brain long enough to get away.

Kevin thinks about going back home but hears his mother’s voice denigrating video games and urging him to do his homework, so he decides to stay and cause his family needless suffering as they deal with a missing child. “What can I say, I’m hooked!” Kevin grins.

I can understand why I liked this when I was younger, and while the action and setpieces are pretty well-done, the writing and dialogue is klunky at best. I still wish I had that controller and zapper, though. It would be amazing to be able to pause time whenever I wanted. 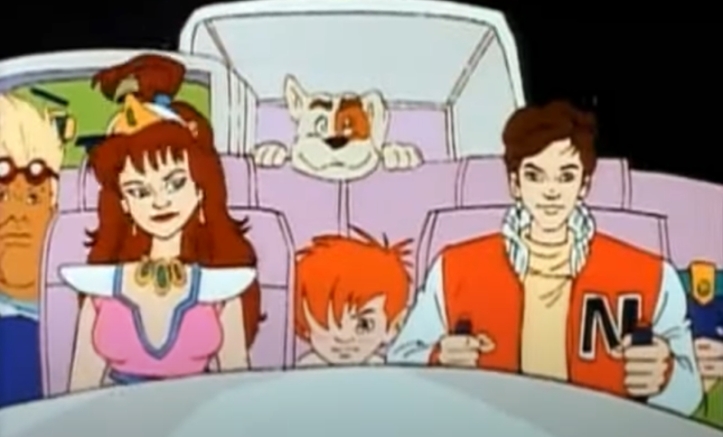 Season 2 Episode 4: The Trouble with Tetris

The second season saw some adjustments with the format — minor things, mostly. A new voiceover for the intro, a lack of nipples for King Hippo, and (sigh) Gameboy. Out of all of the new characters they could’ve added to the main cast, the writers thought they’d just make the Gameboy device itself be a weird robotic mascot. He is not loved in the Captain N community, let me tell you. You can see how the show’s artists struggled to take what is essentially a grey plastic brick and make him into something workable:

I do kind of like “F” there. Anyway, the episode opens with the good guys flying a ship through an asteroid belt for some reason when they get pulled down into a new game world that’s harboring some immense power source. This world is Tetris, and if you thought that it was a tall order to ask the artists to personify the Gameboy, then what do you do for a game where everything is a block? You… make all the people… blocky. Witness:

Kind of looks like they’re on their way to a Devo music video. Or Max Headroom. Their thing is that each person makes as many references to “squares,” “blocks,” and “cubes” as they possibly can before the writers of this episode fall to the ground screaming while their brains ooze out their nose. Apparently this world exists so far on the fringe of the map that the people here weren’t bothered by Mother Brain or had to fight against her. While Lana gets a tour around as is her right as a princess, they learn about the “Sacred Square” that built this world and is surely the huge power source of plot convenience.

Hippo and Eggplant are hot on their heels to claim this power for Mother Brain herself. There’s a pretty clever sight gag when they get run over by a street sweeper and turned into Tetrisy versions of themselves.

We also learn that there’s a normal-looking human — Lyle, I think? — who arrived here a while back and is trying in vain to fit in. Gameboy saves him from his overt dweebness. What can’t Gameboy do? Other than to suck down AA batteries at an alarming rate and play games on a screen that gave us headaches to look at? We find that he’s Prince Lyle, Lana’s brother, and the guard of the Sacred Square. The team tries to install some self-confidence in him, but it’s an uphill battle with this klutz. 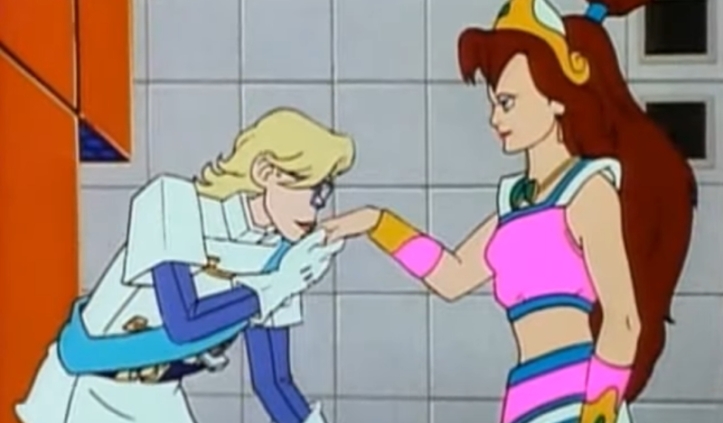 Cue a very bad montage scene where Kevin tries to teach him sword fighting (because that’s a skill that every 16-year-old American boy knows well) and Simon horseback jousting. And there’s a dress-up scene, because of course there is a dress-up scene. My big problem with Lyle is that he looks like he’s a reptilian alien wearing a human skin suit, and the result is so unnerving that you want to back away while pointing and screaming at him. In a genuinely surprising move, Lyle’s confidence comes back in such force that he announces he’s going to rule over Videoland instead of Lana. That’s the power of montage, boys and girls.

About that time, Mother Brain gets the Sacred Square, which causes Tetris to start falling apart (into Tetris blocks, natch) and everyone chases her trying to get it back. Two things I liked about this action sequence: the music is a gussied-up version of the Tetris theme, and Kid Icarus, Megaman, and Kevin all go nuts shooting the blocks. What I didn’t like is that when Mother Brain tries to wall them up using Tetris blocks, the animators really dropped the… cube… in making the wall look like an actual Tetris field. Also, filled in rows like that should disappear. But I’m nitpicking a show from 1989, so I don’t have that high of a horse on which to sit.

Kevin and Lyle get the Square back, and all is good — especially since Lyle is going to stay behind to protect the world. Good riddance.

Yeah so other than the nostalgia factor and some pretty clever visual designs, Captain N doesn’t offer a lot today. Maybe to a kid, but even then, there’s much better fare out there. Farewell, childhood cash grab!