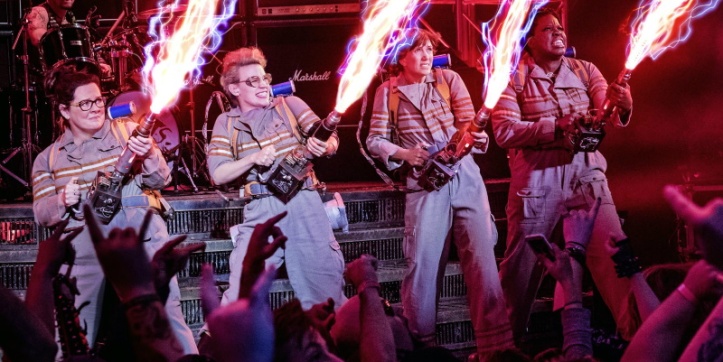 “Well, we just gave a ghost a nuke. We should probably run.”

Justin’s review: I don’t think I’ve ever felt so torn about approaching a movie as I did with Ghostbusters 2016, thanks to the mountain of weird controversy that came with its release and the very mixed reviews. I mean, I’m all for a new chapter in the Ghostbusters franchise, but I knew I’d be damned if I liked it and damned if I didn’t by various frothing groups that decided to make what should have been a passably entertaining popcorn flick a gore-soaked battleground. Eh, you know what? Who cares what the internet thinks. I just wanted to give it a fair shot and see what this new group of spectral stewards could do without feeling pressured to feel any particular way about it until I made up my own mind. Which is what we all should do with movies, by the way, but the internet has a contrary opinion on that.

Despite what the early trailers suggested, Ghostbusters 2016 isn’t in the same universe as Venkman, Spangler, and the rest of the original cast. It’s definitely a reboot that pays slight homage to the original premise while gender-flipping it with four women instead of four men. Honestly, that’s not an awful approach to making the first Ghostbusters film in nearly three decades, although I did wish it was still in the same timeline and there was some sort of “passing the torch” to this new gang.

Inexplicable ghost sightings start popping up all across New York City, much to the delight of one Abby Yates (Melissa McCarthy), who’s made it her life mission to prove that ghosts exist. She’s soon joined in her efforts by her estranged best friend Erin Gilbert (Kristen Wiig), nutty gadgeteer Jillian Holtzmann (Kate McKinnon), and MTA worker Patty Tolan (Leslie Jones). Facing an uphill battle for respectability and legitimacy, these newfound “ghostbusters” gradually put together the tools and the technique for taking cranky spirits down. Unfortunately, their job may be a bit tougher than anticipated, as a very cranky nutjob is summoning ghosts and trying to rip a hole into another dimension.

So here’s the thing: I’m sitting back in my chair after watching it, and I’ve got a smile on my face. It’s a legitimately funny movie with an ensemble cast that is clearly having a great time flinging around wisecracks and marrying the whole blue-collar-meets-white-lab-coats mishmash that is a hallmark of the franchise. Holtzmann in particular is the breakout of the film, relishing her gizmos and weirdness even as the city is going to hell in a handbasket around her. I also got a big kick out of Chris Hemsworth’s Kevin, the Ghostbusters’ secretary, who is dumb and obtuse as toast. The story’s not even half-bad, laying out the progression for both the threat and the Ghostbusters’ development. There’s some great stuff here and more than a few quotes that could be slapped onto a t-shirt. 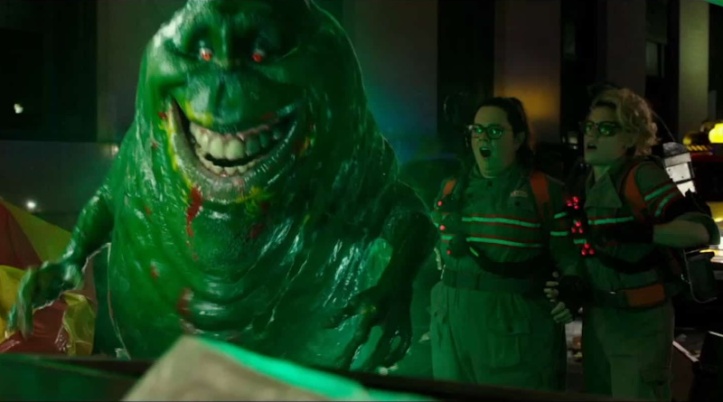 So is it perfect? No, I shan’t go that far, sorry. I feel that there are two deserved criticisms of Ghostbusters 2016 that need to be shared without wiping out the goodwill that this film fostered in me. The first, which is a lesser complaint, is that I was never really sold on the ghost effects. They were too neony and computer generated, looking like something that belonged in those live action Scooby Doo films than here.

The greater complaint, and what I suspect fosters some of the division between fans, is that this movie is trying to get the best of both worlds by being a full-on reboot while trying to pay homage to the previous Ghostbusters movies — and it stumbles in so doing. By throwing in so many cute nods to Ghostbusters 1 and 2 — including Slimer, Stay Puft Marshmallow Man, many of the original actors in different roles, the Hook & Ladder fire station, the logo, and even the basic plot points — it’s inviting comparison. It’s downright begging for it.

And that’s not a good thing when you’re trying to establish yourself as your own standalone movie. You don’t want to keep taunting the audience with reminders of previous movies that they already know and love so much and then go, “Eh, ours is different and we’re going a different way.” It shouldn’t have been a reboot, but since it was, it should’ve toned down these references a whole lot.

That all said, hey, I’d watch it again. I’m totally OK with this being part of the series, and it is a shame that it got slathered with a lot more toxic goo than anything that ghosts could generate. Maybe down the road this movie will get a second chance with people who will watch it on its own merits. One can hope.