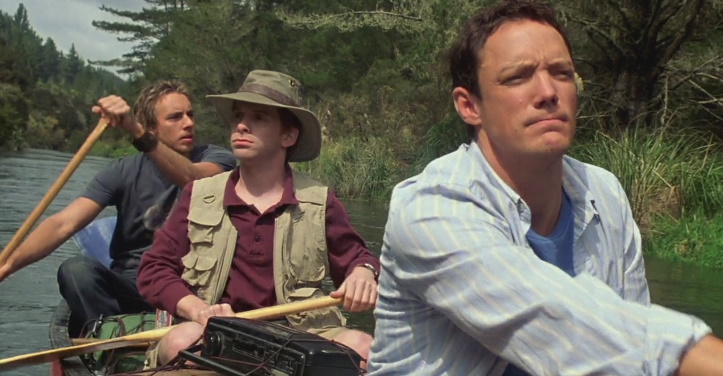 Tagline: The call of the wild. The thrill of adventure. The mistake of a lifetime.

Summary Capsule: The boyhood chums set out to recover D.B. Cooper’s lost money and generally expose themselves to the elements of Burt Reynolds

Justin’s rating: Seth Green: proof that short people do have a purpose!

Justin’s review: It seems that, more than any other genre, it’s easiest to let good comedies slip you by in the theater. Reviews aren’t always as kind or correct as their meth-laced masters wish they would be; box office isn’t always the be-all, end-all of a film’s success; and sometimes comedy takes a while to ripen in the hearts of viewers until it becomes a staid classic (Office Space?). This past year I’ve had the pleasure of unearthing three very funny, very overlooked recent comedies that were quickly ushered into my sacred DVD collection: Eurotrip, Out Cold, and Without A Paddle. All wear their badges of Weird proudly, not boasting ultra-famous actors but solidly delivering the funny.

Of course, I had to see this film; it had Seth Green. Seth Green’s midget stature but giant comedy is only second to a commandment written in stone at the top of Mt. Sinai to get my butt in a theater seat. From Can’t Hardly Wait to Austin Powers to TV’s Buffy and Robot Chicken, Green’s shown himself to be the master of a softer type of sarcasm, the kind that’s more funny than it is cruel, and I truly wish he was my best friend. At least I have a bag of his trash that I placed in a corner at home and talk to now and then.

Okay, so you need to be sold on Without A Paddle, right? I mean, it’s got Matthew Lillard, too, and many times that’s a deal breaker for most sane folks. Rest your weary heads, my children, he’s not as annoying here. When three childhood friends return for their fourth friend’s funeral, Tom (Dax Shepard), Jerry (Lillard) and Dan (Green) decide to take a long-planned trip into the wilderness to find D.B. Cooper as a sort of tribute to their buddy. Cue the strains of “Dueling Banjos” and break out the hillbilly jokes – it’s a bumpy ride!

(I am SO pleased I was able to type “banjos” today. Sometimes words themselves can give a funny, tingly pleasure. You feel dirty now, don’t you?)

Think the road trip from Tommy Boy and throw in a few Deliverance references, and there you go! The basically nature-deficient idiots trek down a river, completely unprepared for the bears, pot farmers and hippies that lay ahead. Along the way, they examine their lives (of course) and bond by snuggling while wearing only wet underwear (um… of course). More enjoyment for us!

Against expectations, the goodly chunk of the humor doesn’t really come from the big events or set pieces (haha, they went over a waterfall, that’s funny in a Dick Van Dyke sorta way). Actually, I found myself far more happy to be laughing at all of the terrific dialogue – many of it subtle, throwaway quips – that kept constantly popping out of our characters. The movie becomes a contest of one-upmanship to see who will spout the quote that will stick with you most after the end credits. It’s a tough call, frankly.

Trust me: you need this in your life. At least, in a day of your life that you could use a spunky pick-me-up chock-full of comedic gold, untouched, awaiting your discovery.

Dan: The only chance we have to survive is to huddle together for warmth…
Jerry: I, for one, choose death.

Jerry: I christen this, Duke the second! [smashes beer bottle on canoe]
River Guide: Thanks for breaking glass where my kids play.

Tom: Is this Billy’s funeral? Is that the corpse of Billy Newwood?

Jerry: Come back to bed, you guys. I’m freezing.
Tom: Not until he puts Jabba back in his Hut!

Dan: [doing his best C3P0 voice] We are in serious trouble my friends. All data points to us being… how do you humans say it? Completely screwed.

Del: Come with me, or I’ll shoot your testicles off and stuff ’em and mount ’em on my mantlepiece.
Tom: That’s gonna be an ugly mantlepiece.

Jerry: So this is Spirit River, we take that to Widowmaker Bend and then we hike to Devil’s Staircase and that should lead us right to the top of Hellfire …
Dan: What’s with all these satanic names? Isn’t there, like, a Fluffy Bunny Way?
Tom: No… but there’s a Shut-Up-You-Big-Baby Ridge.

Tom Marshall: So you’re saying you lost the map? You don’t have it?
Jerry Conlaine: No, I’m saying I forgot to hold on to it while my ass was free-falling over a 100-foot waterfall.