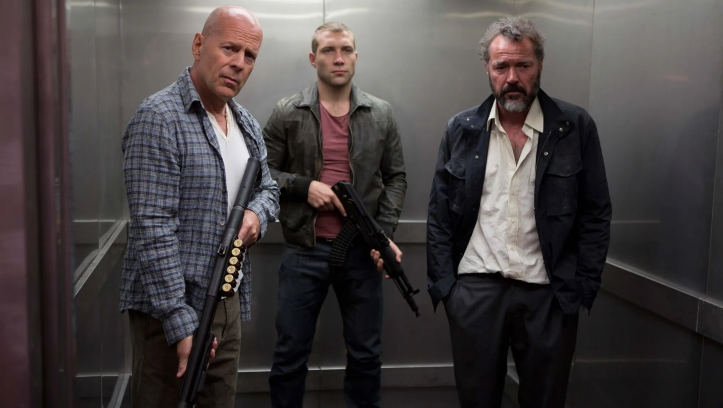 “The things we do for our kids…”

Summary Capsule: John McClane remembers he had a son in the first few movies and goes to get him out of trouble in Moscow. Unsurprisingly, he causes more trouble than he prevents when it turns out his son now works for the CIA.

Al’s review: I promised myself I wouldn’t see A Good Day to Die Hard. It looked lame and I honestly had no desire. Plus (and perhaps more importantly), I had once stated in a review that I didn’t think we’d ever see another one of these movies, so the fact that it got made anyway was pretty annoying. As tends to be the case with me, however, my common sense and my desire to save ten bucks couldn’t compete with my curiosity and my optimism that maybe—just maybe—some part of what made Die Hard such a perfect movie experience in 1988 would be translated over into Die Hard 5 in 2013. If any part of that spirit had survived, I knew I’d want to watch this movie in a full theater instead of on my tiny home TV. So I paid my money and I took my chances.

I’m such a sucker.

A Good Day to Die Hard is bad. Really bad. It’s dumb, it’s dull, and it doesn’t trust its audience even a little bit. Instead of John McClane, who is brimming with smartassery and uses his brain to overcome the odds, we get Bruce Willis, who looks tired and bored. Instead of a dangerous villain with a cunning plan, we get four or five “main” bad guys, including one that eats carrots and dances soft shoe, who seem to take turns being in charge of the same army. Instead of a plot, we get automatons who kill bunches of people while marching through a series of abandoned buildings. Instead of memorable supporting characters, like Ellis the coke-snorting blowhard and Rich Thornburg the sleazy reporter, we get… no one. It’s a sad, sloppy, lonely mess.

The short version of the story goes something like this: John McClane is old and fires guns. He has a son, who looks a little bit like him but not really, and he fires guns, too. They are in Russia, and all non-taxi-driving Russians are evil.

Now, I hope you were able to follow all that, because the filmmakers were clearly concerned about your ability to process concepts like “character development” and “narrative” and “the slightest shred of intelligence or wit”.  There’s some set dressing thrown around about John McClane trying to help his estranged son, Jack, and finding out that Jack secretly works for the CIA, but none of it matters. None of it is Die Hard. A Die Hard movie has plenty of running and gunning, but it does it with cleverness and charm that keeps the action in check and keeps the viewer invested.  Even the less-than-great installments managed to capture some of that humanity and at least felt like they belonged in the same universe. This imposter features a pair of robot supermen with no onscreen chemistry who get hit by cars, impaled on steel rods, and dropped off of multi-story buildings, yet still race from one action scene to another without needing to reload or catch their breath. It’s like they pulled some third-rate Cold War script out of mid-80s and scribbled “Yippie Ki Yay” on it in different-colored ink.

The movie isn’t even funny. The attempts at humor are mostly the kind that register in your brain as jokes but don’t actually provoke any kind of reaction. Willis also has an ‘I’m-not-even-supposed-to-be-here-today’ line about “being on vacation” that’s intended to be a running gag but doesn’t actually end up making any sense, as he is very specifically not there on vacation. In fact, now that I’m thinking about it, what was he doing in Russia? I mean, I know why he goes, but what was his goal? Was he there to talk to Jack? To pay his bail? To watch the trial? To bust him out? I’m pretty sure no one ever bothers to tell us. Eh, I guess it’s just one more thing not worth thinking about.

Before I wrap this up, there are two things I liked about A Good Day to Die Hard, and I suppose it would be wrong of me to skip them. First, the movie features a pretty amazing car chase. It goes on about twice as long as it needs to, but it features the most impressive stunts I’ve seen in a while and looks like it was done without a whole lot of CGI. Second, I was happy to see this movie go back to its R-rated roots. The PG-13 they slapped on Live Free or Die Hard wasn’t the end of the world or anything, but it felt pretty disingenuous as the franchise basically markets itself around a curse word.

There. Those are all the nice things I have to say about A Good Day to Die Hard. Now my conscience is clean.

Don’t see this movie. Please. It’s a stain on the reputation of the franchise and it has nothing to offer for the time and the money you’re going to spend. It’s not fun. It’s not exciting. It barely even tries. Everything about this is a disappointment.

John McClane: The things we do for our kids.
[drives off a bridge]

John McClane: This is what you’ve been doing? Spy stuff? The double-oh-seven of Plainfield, New Jersey?

Alik: You know what I hate about the Americans? Everything. Especially the cowboys.

[Arming themselves]
John McClane: What is this? A pirate gun?
Jack McClane: It’s old school. Like you.

Jack McClane: Do you go looking for trouble or does it always find you?
John McClane: After all these years, I still ask myself the same question.