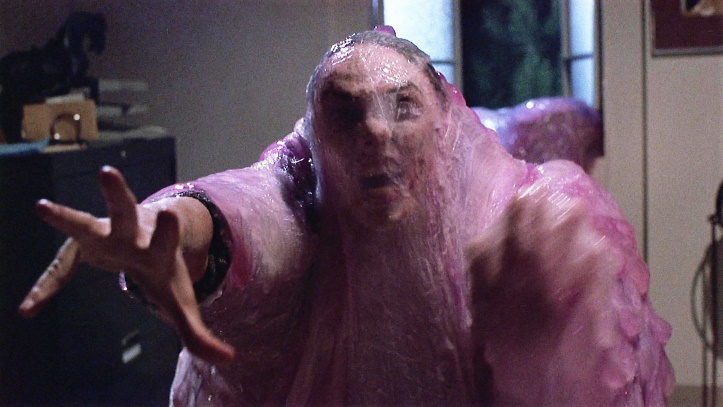 Louise’s review: Here’s a warning to anyone watching this film. No character is safe. The sacred cows of cinema are taken out and turned into so much Blob. Not only are they turned into Blob, but they are all Blobbed in unique and gruesome and slightly stupid ways. All those characters we get to know and like (or maybe dislike), well, they’re doomed. It may be tentacles, it may be flumpf!, it may be Blobzilla, food disposal, from the inside, from the outside… the Blob will Get. Them. All. All! All except the plucky virtuous middle-class girl and the mulleted working-class motorbike punk, because we need them to be our heroes and kiss at the end.

I get cross if there’s not a kiss at the end. A sci-fi horror with a decent kiss between decent characters is *my* kind of sci-fi horror, and I was actually very impressed on this occasion. Our heroes are Meg Penny (plucky virtuous middle-class girl) and hilariously hirsuted Brian Flagg (working-class motorbike punk) and I really like them, individually and together.

They live in a small ski town facing a lean year. Brian is fixing his bike out in the woods one evening when he is surprised by an old homeless man with a sentient alien goop on his hand eating him alive! Argh! Brian pursues the slushied hobo onto the road, where they find Meg, on a date with sweet/arrogant Paul. Brian and Meg from then on are trying to stay alive and solve the mystery of the Blob. What is it? Where did it come from? Can it be killed? All the while we’re pondering, hey, these guys could be good for each other! If troubled Brian could win over Meg’s protective dad, she’d have a brilliant broody boyfriend to get brave and determined over. It’s the movies, and every Claire would secretly like a Bender.

Picture the scene: the Blob has begun its rampage through the woods and sewers of the small town. It’s killed a few people — hobo, Paul, horny teenagers, kind waitress lady, the sheriff, for God’s sake — and these aren’t spoilers, peeps, ’cause I told ya everybody dies! Now if we’ve seen the Steve McQueen version from thirty years earlier, we think we know how the rest of the story is going to go, but there’s a little’ 80s twist at this point with the arrival of some ‘government scientists’ led by creepy Dr Meadows. They say they’re there to help with the ‘space virus’ but they’re not! No, no, no, these are baddies who sent some germs up into space, and now it’s come back to earth as Blob there’s no way the scientists are going to abort the experiment. No way! Don’t these innocent citizens realize how expensive R & D is?

I find The Blob pretty scary because it is bloody and disgusting, and the Blob itself is dangerous and seemingly unstoppable. It’s not much of a film for shocks, creeping suspense, jumps etc. It’s pretty clear when a character is about to become fodder for these sentient drying crystals. No, the horror comes from the gore, if you find gore upsetting, and its implications. This is a horrible, horrible thing, and you can imagine that it could take out the entire town, and then the whole country, and nothing would ever be able to stop it. Moreover, I have real issues with the suffocation/assimilation method of killing. It’s a ghastly way to die, and thanks to the character development you feel sorry and sad to see people condemned in this way. Ugh! I shudder just thinking about it.

Brian is played by Kevin Dillon, and I am delighted by the portrayal. Thanks to Kevin, Brian doesn’t look too mature to be 17, he’s got acne on his face and only okay teeth. Unlike many movie heroes of today, he’s neither excessively plucked and groomed, or a slacker/nerd type, but he’s fierce, suspicious and he can ride his bike upside down in a tunnel. Meg is played by Shawnee Smith, who is just beautiful! That lovely face and blow-dried hair combined with the bravery and quick-thinking of the character makes Meg a serious competitor for Perfect 80s Girlfriend. Take note, Justin! And as for you, Elizabeth Shue, look to your crown.

This is obviously a remake of the 1950s B-movie of the same name. The two have the same premise, and a couple of characters and themes in common (e.g. little brothers, good cop/bad cop), but they have a very different feel. The intervening years mean that they have more in common with other films of their time than with each other. The Meg-Brian relationship is taken directly from ’80s teen dramas, for example. I already mentioned Claire and Bender, but Valley Girl also comes to mind, and I’m sure there are others. It comes down to personal taste which is the better film — I come down firmly in favour of ’80s Blob with regard to everything but the ending. While ’80s Blob has an ominous ending as you’d expect, it’s ominous in an entirely different and not nearly so chilling way.

Wait! What’s that burbling in my pipes! I’ll scream now while I can still breathe!

Brian: Your meteor brought something all right, but if it’s a germ, it’s the biggest son-of-a you’ve ever seen!

Herb: I feel like a one-legged man in an ass-kicking contest.

Eddie: This guy in a hockey mask, he chops up a few teenagers, but don’t worry, there’s no sex or anything bad.

Brian: We’re your prisoners.
Dr Meadows: Not at all, you’re my patients.

Moss [observing Blob carnage all over the street]: I hope I’m covered for this sort of thing.

If you enjoyed this movie, try: