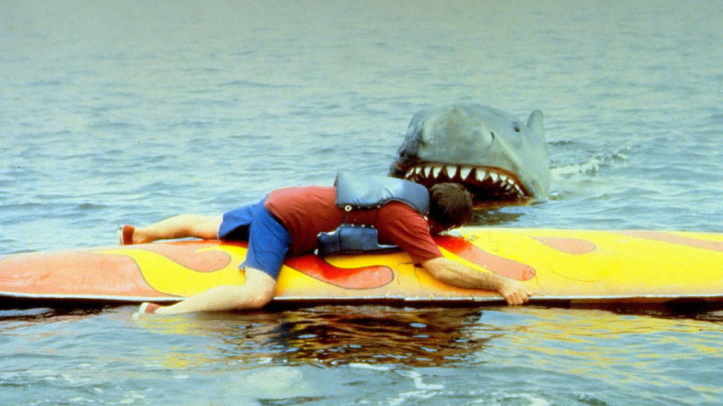 “Get out the blankets. I’m getting black and blue marks all over my butt, and my mom’s starting to get uptight about them!”

Tagline: Just when you thought it was safe to go back in the water…

Eunice’s rating: Not as bad as actually being eaten by a shark.

Eunice’s review: I’ve never understood the absolute hatred some people have for this movie. It’s not the worst second outing of a franchise, and is the best of the Jaws‘ sequels (title for worst goes to The Revenge, best description I’ve heard for that one is “Michael Caine takes a paid vacation in the Bahamas”). If nothing else it has the most memorable tagline out of the four.

We find ourselves back at Amity Island. When another shark starts making with chomping action Sheriff Brody is the only one who has the thought, “Gee, maybe it’s a shark making these huge bite marks?” Apparently everyone else suffers from amnesia, and our sheriff garnered absolutely no increase in respect or trust from the islanders after the events of the first movie. Why? The script demands it! That’s why! He doesn’t help his case of not looking paranoid and crazy when, in one of my favorite scenes of the movie, he COMPLETELY LOSES HIS MIND running around screaming, waving and firing a gun on a crowded beach trying get people out of the water. Which kinda gets him fired.

There are things that I genuinely like about Jaws 2. While on the one hand it reminds of the previous, better, movie it ties back to it for a better flow, something the other movies don’t even bother trying. It opens with divers inspecting the wreckage of The Orca, and when Brody starts to suspect a shark he tries to call Hooper and (since Richard Dreyfuss didn’t return) the movie has a logical reason he can’t get ahold of him. The other thing I like is the relationship between Martin and Ellen Brody, it just really works. Roy Scheider carries the movie and Lorraine Gary is the only other real support he gets to play off of. Also Brody’s relationship with the town and the mayor. The scene with the shark eye in the picture.

It’s a weird thing to say, but the parts that are more of the same are the best. It’s when it tries to be bigger than the first one it stumbles. Like all of a sudden the shark has the sense to cover up its crimes by burning the evidence. Or shark vs helicopter. Or how you can blow up a shark with electricity without electrocuting yourself. There’s a secondary plot of teenage rebellion from the older Brody offspring, with a touch of summer lovin’, but since I can’t stand the girl it only matters as far it leads to the teenage body count rising, beginning a move toward a slasher feel in the series that would go overboard in Jaws 3-D.

So it’s not as good as the first one and requires a substantial amount of suspension of disbelief, but still ties in nicely. You know, before the long Sea World commercial and Ellen Brody became psychic.

Andie’s rating: The shark’s back and he’s hungry for teenagers!!!

Andie’s review: Okay, I know the Jaws franchise got a little out of hand (Jaws 4: This time it’s personal?) but I happen to like the second one a lot. I think it’s funny and entertaining, plus it’s just cool that there’s all these teenagers running around getting eaten.

The basic idea is that Brody is still chief of police of Amity Island and the shark comes back. Of course, nobody believes Brody AGAIN (you’d think these stupid islanders would learn the first time) and more people get chomped. This time, though, Brody’s son Michael (who got really cute) is out sailing around with a bunch of friends during the big climax.

Some of the highlights include when a water skier bites it (or I should say gets bitten), when Brody gets drunk after being fired, and when there is an unfortunate accident involving a rescue helicopter for the teenagers.

In no way does this movie even compare with the first one. It’s not Spielberg and it’s not scary, but I find it a fun movie to watch sometimes just for mindless entertainment.

Kyle’s rating: not the worst out of the four, but it’s close

Kyle’s review: Let’s face it, people. The original Jaws is fantastic, a film for the ages that will always be cool. Its sequels leave something very much to be desired, and despite the inherent coolness a film will have simply by revolving around a killer shark, the Jaws sequels are heinous.

Jaws 2 is often on cable. It’s one of those movies that I won’t really set aside time to watch, but if I end up near the television and I need it on to keep the noise-fearing poltergeists that live in my SoCal home away, and the only things of interest on are Jaws 2, a Dynasty marathon and whatever they show on this country music channel I get, then I might turn Jaws 2 on. But it would sure be a tough decision.

Let’s see. It’s still Amity, Roy Scheider is still the chief of police, and once again a killer shark is running rampant and no one in charge believes him. I guess they forgot the last time. But if Roy could handle that last big scary shark, I bet he can handle this one on his own. There are some kids in jeopardy and stuff, and it’s all on the ocean and they don’t really talk about how these stranded kids avoid sunburn, which I would like to know about because I hate having to lather on all this sunscreen and if there is a better way let me know!

But I digress. Jaws 2 isn’t quite as bad as using a soup ladle to scoop out your own eyeballs and boiling them, but if you’re at the video store trying to decide if you should rent Jaws 2 for a night of entertainment, I would suggest considering midnight basketball or a few hours of humming instead of Jaws 2. Rent the original with no qualms, but fear the sequels. Fear them!

Mrs. Taft: Your husband’s been here all morning. What’s he doing?
Ellen Brody: His job.

Tina: Get out the blankets. I’m getting black and blue marks all over my butt, and my mom’s starting to get uptight about them!

[teenagers are leaving for sailing]
Ed: I thought you said she was coming with us.
Larry: Yeah, well, she’s not, okay?
Ed: Do you wanna talk about it?
Larry: Do you wanna swim home?