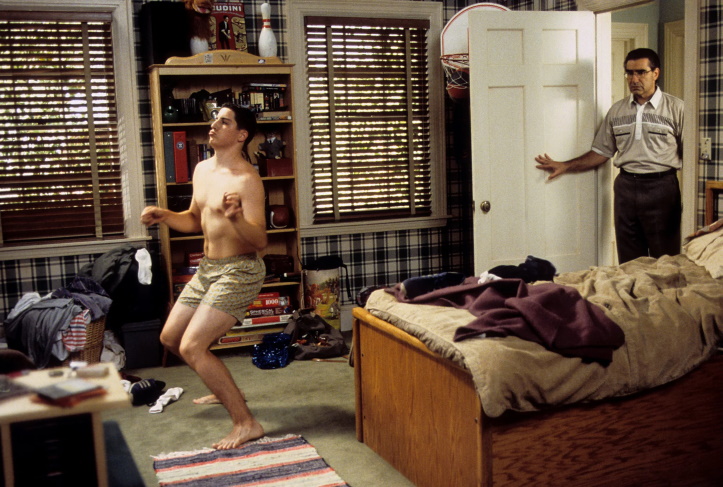 Andie’s review: I have to tell you, I thought this movie was one of the funniest movies I’ve ever seen. It was crass and gross, but then again, so are high school and college. (A few of my guy friends are fond of saying, “I’d like a pizza… a pizza ass!” )

Anyway, I liked it so much I went and saw it twice in one day in the theaters. This movie just completely spoke to me, probably because I know a lot of people that are just like the characters. The basic idea is that four guys vow to lose their virginity by prom night. The ensuing hijinks are fantastic. I found myself actually cheering these poor schmucks on as they did everything they could to con girls to sleep with them (which, as a girl, is a little embarrassing). Jim (Jason Biggs) and Oz (Chris Klein) were particularly endearing in their quest to get a piece. I also have to give kudos to the females of the movie, especially Jessica (Natasha Lyonne) as the sex-wise friend to the naivé Vicky (Tara Reid) and Michelle (Alyson Hannigan) as the flute-toting band dork. Hands down, she has the two best lines in the whole movie.

Anyone who was offended by this movie needs to be slapped and told to lighten up. It’s not out to be poignant or touching or moral. It’s supposed to be funny! And that’s exactly what it is.

Justin’s review: Despite how raunchy modern comedies want you to think they are, they’re really somewhat tame compared to teen sex romps of the late ’70s and ’80s. American Pie is a film that centers around the age-old concept of high school kids with little else but coitus on the mind. After seeing the famous pie commercial (American Pie‘s answer to There’s Something About Mary‘s “hair gel”), I expected at least a Penthouse Letters/Hustler type of film. But instead, we got a warm-hearted movie about kids learning that sex isn’t the be-all, end-all they think it is.

Four high school guys make a vow to release themselves from the bondage of virginity by their high school prom. Not highly original, but it does allow for a few good scenes, including when dorky Jim (Jason Biggs) keeps getting caught by his father while… well, you know. At one point his dad gives him the “talk” that had to be the most hilariously embarrassing movie scene I’ve ever experienced. Some of the other plot threads felt predictable and lacking. For kids who are supposedly sex-crazy, they don’t seem utterly enthusiastic about it for most of the film.

Maybe that’s the point. It’s really ironic how the kids in this flick seem to be buying into that Great Myth (that is, you can’t be a man or respected until you’ve had intercourse), yet even before they get around to doing it, they discover that the world of sex isn’t as carefree or rewarding just for the sake of it.

For a while in the early 2000s, this series was among my most-watched — and it wasn’t for anything sexual, believe it or not. I simply enjoyed the friendships that the guys and girls exhibited here. I wanted to hang out with them in a weird, virtual way, because I imagined that they’d be the type of people who would be my own friends given half the chance.

While at times crude and base, American Pie shows a deeper understanding as to what’s really going on in a teen’s sexual world, and there’s real truth to be found in that. Aside from the serious or naked stuff, AP has a high laugh quotient, an even higher quotability scale, and gives us some of the geekiest leading men of our time. Solid.

Jim: You realize we’re all going to go to college as virgins. They probably have special dorms for people like us.

Vicky: I want it to be the right time, the right place…..
Jessica: It’s not a space shuttle launch, it’s SEX.

Kevin: Separately we are flawed and vunerable, but together we are the masters of our sexual destiny.
Jim: [imitating dubbed martial-arts dialogue] Their tiger-style kung fu is strong, but our dragon-style kung fu will defeat it!
Kevin: Guys…
Oz: The Shaolin masters of East and West must unite! Fight! And find out who is number one!
Kevin: GUYS! I’m serious!

Oz: Friends call me Nova as in “Casanova”.

Sherman: I’m a sophisticated sex robot sent back through time, to change the future for one lucky lady.

Finch: Did not just take out that chair.
Kevin: Yup, he took out the chair.

Michelle: One time, at band camp…