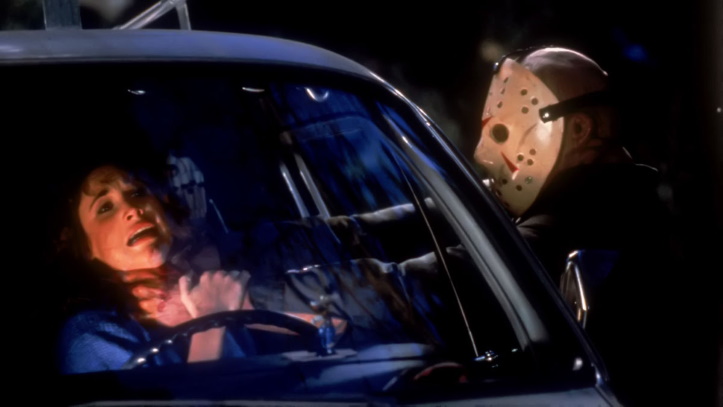 Tagline: A New Dimension In Terror

Kyle’s rating: Will the man in the hockey mask please stand up?

Kyle’s review: Friday the 13th Part 3 is notable as the film where Jason picks up his now-trademark hockey mask, but this installment has special meaning for me as having the last F13 heroine that I really like and would become fictional myself just to have the chance to date. Amy Steel was cute and strong in Part 2, but in 3 Dana Kimmell is attractive, strong and she has baggage. Guys love chicks with baggage! Chris Parker (Kimmell) does have some emotional problems (she’s haunted by a terrifying nighttime experience she had in the forests of Crystal Lake, plus she has a bit of droopy chin-neck flab) but she’s wholesome and worthy enough that you won’t want to see her steaming entrails spilled on-screen. As for the rest of the cast’s viscera, well…

I’m pretty sure Part 3 takes place mere hours after Part 2 in a different area of Crystal Lake, Higgins Haven to be precise. The opening scenes show us some ill-fated characters watching the evening news and learning about the bloodshed that went down in the previous movie, just in case they (or you) missed it. A few quick bloody murders and we’re off!

It’s still 1984, and a group of presumably college kids are driving a van to Chris’ cabin some distance away from Camp Crystal Lake, so I guess they guess they’ll be perfectly safe. One of the girls, the beautiful Vera, is urged by her mother not to go on the trip but she foolishly does. She soon learns to regret it, as she comes face-to-face with… SHELLEY! The well-intentioned but oafish roommate of the token male “hunk” who tags along for the ride in hopes of getting lucky despite being overweight, prone to self-ostracizing practical jokes, and having a poorly-advised hairstyle. There are other young male and female characters, including a hippie pot-smoking chaperone couple and a trio of “tough” bikers who decide to teach these young punks a lesson after (surprise!) Shelley offends them. Waiting on the fringe just itching for his chance to rip and rend is Jason, who remains mute but is undoubtedly still very angry after the events of Part 2. Put all these characters together in the same section of woods and you don’t have a recipe for a nice picnic, you have a recipe for a bloodbath!

I have to say I’m torn between Part 2 and Part 3 as my favorite F13. These two films seem like they were trying hard to make a good suspenseful slasher movie that happened to feature Jason as the villain, versus later installments that were gory first and scary second and were built around Jason. Maybe it’s just me since 3 and even 2 are labeled two of the worst in the series by people with nothing else to do but rank them, but thankfully those people aren’t here right now to speak their foolishness and stink up the place (generally people who disagree with me smell like garbage. I don’t know why, they just do!).

The actors seem to be trying, the isolated cabin and surrounding wilderness is effective, Jason is brutal and not the mockery he’ll become, and Dana (even with chin flab) is cute. What more can you ask for? You’ll see blood and guts, Jason gets his mask, and I can reveal the annoying Shelley gets what’s coming to him. If you liked the first two, you’ll certainly like this one!

Justin’s review: Friday the 13th Part 3 is as far from the rebelling-against-stereotypes as you’re wont to get; it revels in its clichés (which might’ve been new at the time) and serves as an active workout for your eye-rolling muscles.

Despite a few novel additions — which will be discussed later, in a coffeehouse setting over a steaming cup of non-fat vanilla latte — Part 3 of this series is a weak rehash of the first two movies (particularly Part 2, which was far more fun). Although we all know the killer is now Jason, the filmmakers keep playing the cat-and-mouse game with the camera to keep from revealing his whole body until late in the movie. Taking place a day or so after Part 2 (I think), Jason’s miraculously healed from machete wounds and is wandering all over the place killing people for no gosh-darned good reason.

Since his killings aren’t very scary (although they are far more brutal this time around), I occupied my spare time thinking about Jason’s post-kill activities. Repeatedly, Jason not only moves the bodies so that future people can find them in weird places and scream, but he also seems to spend a lot of his efforts cleaning up the copious amounts of blood on the floor so that no one will be the wiser. Why? Was housekeeping services his #2 pick after going to career counseling in college?

Slightly getting away from the camp theme of Parts 1 and 2, Jason instead antagonizes a group of lackluster friends who travel up to a cabin (near Crystal Lake, we presume) to spend the weekend getting in touch with their central nervous system. Unlike Part 2, none of these characters are all that interesting or likable – the bare exceptions being the cutie lead and the buffoonish clown — and the plot more or less follows the exact same progression of the previous movies. Jason picks off someone at the beginning, Jason stalks a while, kids fool around and do drugs, omens are foretold, Jason goes on a full-fledged killing spree one night, bodies are stacked up everywhere, someone struggles to find their car keys, Jason has to knock down a door at one point, long chase scene, and a previously wimpy girl finds inner strength to kick his butt.

So, really, you’re left with just two reasons to see Part 3. Well, three reasons, if “being a completeist” is one of them. The other two would be to see Jason gaining his trademark hockey mask (which arguably was the biggest reason he became the horror icon he is today) and for the ultra-cheesy 3-D effects.

Even without those special glasses, the 3-D scenes are easily identifiable because something approaches the camera closely while everything in the background is fuzzed out. It’s an idea worth merit, but gimmicks like 3-D are never what make movies, and here they’re just distracting and odd (watching popcorn coming at you… ooh, spooky!). Enjoy Jason being spry and active while you can – he’s not long for the running world after this!