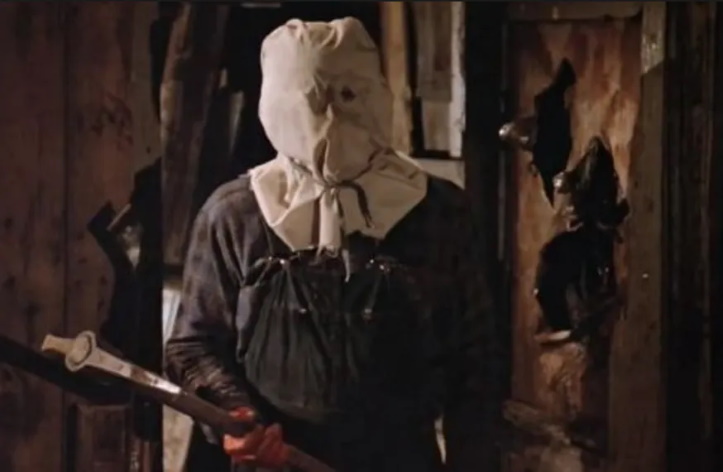 “These kids smoke better dope than I do.”

Kyle’s rating: a healthy vein of steel runs through this one

Kyle’s review: The arterial burst of bloody slasher films that would permeate the ’80s was largely spilled in the first place by 1980’s Friday the 13th, and that film’s popularity made it possible for sequels to be made. Lots of sequels! This is the first and one of the best that would follow the original, and in my humble opinion this is where all the fun starts!

Part 1 gave us the set-up and the reason Jason is such a crazy and pissed-off dude, and Part 2 allows him to get down to his bloody business. It’s now 1984, five years after the massacre at Camp Crystal Lake, but what is there to worry about? Mrs. Voorhees is dead, right? Nothing to fear. Yeah, right!

Part 2 is a virtual remake of Part 1, but with some new wrinkles thrown in that make all the difference. If it comes down to it, and you and a friend are arguing in the middle of your local Blockbuster over what karma-blackening slasher film to rent, heed my advice: pick Friday the 13th Part 2 over the original! Or pick Part 3 instead (more to come on this debate in the review of Part 3)!

Improvement #1: it’s the villain we all know and hate! If you’ve seen Scream and heavy drinking hasn’t erased your memory, you know who the killer is in Part 1. But it’s no secret that the killer from Part 2 on is that well-known machete-wielding madman: Jason! No, he doesn’t have his hockey mask just yet. Yes, I think he looks terrifying in the one-eyed potato sack he wears in this outing. It really wouldn’t matter what he’s wearing, be it a tutu or a leather dominatrix outfit, he’s still too strong and too wily for these poor young counselors to fight. It’s going to take a special kind of person to stand up to Jason, which dovetails nicely into the next paragraph!

Improvement #2 – ultra-strong heroine! F13 movies have very strong female protagonists (kind of), and Adrienne King helped set the standard with her bravura struggle in Part 1 (earning her a cameo in Part 2). But here Amy Steel as Ginny Field breaks the mold and stands as arguably the toughest chick in the entire series. The clue is in her name: she’s a girl of metal! Steel, to be precise. The blonde-haired vixen is up at a camp near Camp Crystal Lake (nicknamed Camp Blood) schooling a group of counselors before the kids arrive, but once the blood hits the fan she finds the inner strength to survive against formidable odds. She even manages to break one of the Golden Rules of horror Scream heralded as unbreakable more than a decade later (sex is good!). Along the way Ginny reveals she’s majoring in child psychology, which I guess she studies on her days off from kicking ass. Go Amy Steel! And most of all, despite being pursued by an insane murderer and knowing she’s dead if she makes a wrong move, she doesn’t even pee in her pants! Oh, wait…

Improvement #3 – I like the whole cast! This is the first F13 where I like pretty much the whole cast, and not just because of the rampant nudity and clotheslessness. Despite the first film’s inclusion of Kevin Bacon into the counselors (or perhaps because of it), none of that cast was too sympathetic. But in Part 2 I like all the characters as people I would hang at counselor training camp with, and even though I know most must die their gory demises have a bit more impact when you kinda like them. These are fun kids! Practical jokes abound! There are jiggling breasts! Kids want sex! And fun! And extra dessert rations! Sure, they’re all dumb dopey teenagers at heart. But aren’t we all? And just how does that Terry girl get those you’ll-know-them-when-you-see-them oh-so-tight shorts on? Was some sort of yoga stretching technique utilitized? Or are they painted on, as I strongly suspect?

Part 2 takes the standard plot (group of far-from-civilization counselors get stalked by cunning unstoppable psycho) and adds little flourishes to make the whole thing better. The pace is fast, tone is light, the camp seems fun, and when things go bad they really go bad. You’ll root for the best blonde in the series, you’ll wonder how Jason can see out of that sack, you’ll warn older viewers about the blood factor of the murder scenes and then smile secretly when they scream in old person horror at each and every jump scene. Just mind those rats!

Andie’s rating: These kids smoke better dope than I do

Anyway, so Part 2. I really enjoyed it. I like the child psychology aspect of it and I really thought the climax (I don’t wanna spoil it, but it involves a REALLY gross old sweater) was very complex and interesting. What Ginny does never would have occurred to me, that was pretty slick. And I also agree with Kyle in that the characters in this one were a lot more likeable than the first group of couselors. These kids were funny and cool and just looking to party and get laid. By the way, I was so disappointed that the guy in the wheelchair didn’t get some ass before he bought it. I mean, you stick him in a wheelchair, for god’s sake! You gotta throw him a bone here and at least let him cop a feel before he takes the big machete to the face. That is just not right.

Now, what I really enjoyed about Part 2 is that it has this totally complex climax and likeable characters, yet doesn’t lose the horror movie schlockiness we all know and love. It still has the chilling opening scene which the Scream trilogy is now famous for. It still has a horribly cheesy cat scare. It still has the girl discovering her dead friends and the monster coming at her and instead of running, like a smart girl, she simply cowers against the wall and screams as he raises the knife. It still has gratuitous nudity and teenagers having sex like rabbits. I mean, honestly, what more could you want in a movie?

Also, there are some really great humorous parts in Part 2. I love the guy Scott always lusting after the Whore of the North Woods. You know who I’m talking about. The girl who jogs around in miniscule shorts and a cut off t-shirt and really doesn’t mind all that much when Scott steals her clothes when she’s skinny dipping. I mean, she doesn’t try to cover up, she just trots after him completely naked. What is that? I think that would hurt. I can barely walk around without a bra…..okay, enough about that. Another thing that makes me laugh really hard is when the little moppy dog goes up to Jason’s feet and looks up at him and the camera cuts to a shot of hotdogs on a grill. That is classic, so funny! And finally, I absolutely love it after Jason kills Vicky (the girl who cowers against the wall instead of running), we see her bloody legs go thumping down the steps as he drags her somewhere. Cracks me up everytime.

I think I’m gonna have to go check out Part 3 now and it looks like I’ll just work my way thru the series. I’ve already seen all of them except Part 4 and Jason Goes to Hell, but it’s good to revisit your old favorites. However, Part 2 is really a shining moment of the series and I think everybody should check it out sometime.

Justin’s review: This is a tale about a dog. A little fluffy rat-dog named Muffin. One summer, Muffin went to camp. There, Muffin did many things: she danced with a counselor, she was the subject of adoration by a beautiful coed, and she got her revenge upon all of the slobbering idiots who thought it’d be a good idea to name a dog “Muffin” and style her hair every week. Sure, everyone THINKS Jason is the killer in Friday the 13th Part 2, but Muffin knows better. And she’s coming for you!

Rat-dogs aside, Part 2 is when the Friday the 13th franchise got interesting for me. Sure, the first one had its interesting moments and six degrees of Kevin Bacon’s death, but it had (pretty much) no Jason, and none of Jason’s chatty quips. Oh, wait. Is Jason the one with the finger knives who comes in the dreams? *digs out my Cliff’s Notes* My bad. This is the goalie guy with the machete.

I don’t know why ’80s slasher horror is so fun; it just is. Part 2 is probably one of the best examples of this unique blend: it’s pretty much your typical ’80s teen movie with a few creative deaths thrown into the works, while lacking a dressing room musical montage. Unlike many modern slashers, it’s easy to like the counselors in Part 2 who take up unfortunate residence in a brand-new camp opening up in the same area that housed Camp Crystal Lake. These guys and gals are funny, play pranks on each other, go all squirrelly when it’s time for sex, and even figure out Jason’s psyche.

As part of summer camp preparation, these dozen or so counselors set up shop and just wait for a brand-new killer to pick them off during one dark and stormy night. Unbeknownst to them, the legend of Jason — the boy who drowned in the lake, who’s mother killed for revenge, and who came back himself from the dead — is actually true. Jason’s been whittling away his time building the crappiest shack in the wood, covering his mutant face with a potato sack, and hunting down the final survivor of the first movie (in perhaps one of the longest, and most boring pre-title sequences ever). According to the judge, who sentenced Jason to make movies for the next 25 years or so, Jason is forbidden from using the same implement of death twice here. Creative killings is his M.O. — strangling, stabbings, slashings, tickling, mooning, you name it.

Although Jason had yet to don his infamous hockey mask or gain supernatural strength, he’s still a hard-working serial killer out to entertain his victims. Like the first Friday the 13th, Jason goes out of his way to prop up his victims’ bodies for upcoming victims to find, get a bit freaked out about, and then die themselves. I suspect Jason’s videotaping the whole deal for an upcoming Fox special.

Aside from the opening, Part 2 is a breezy, fun slasher that isn’t as scary or dumb as you might imagine. Plus, and I’m only saying this because he proved drinking wasn’t a killable offense, Ted rules. Bring back Ted for part 12!

Ginny: Paul, there’s someone in this room!

Sandra: Jeff, don’t wear yourself out. You wanna wrestle, come with me.

Paul: These kids smoke better dope than I do.