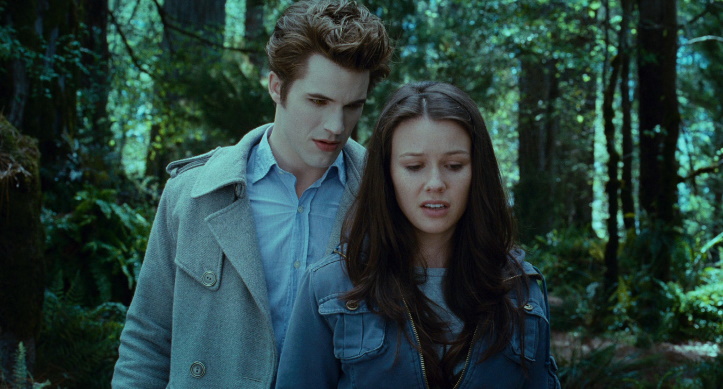 Eunice’s rating: The pluralization of the word “vampire” is highly misleading, says I.

Eunice’s review: You know it’s weird, I know exactly what I want to say about this movie, but no opener came to me. Huh.

[The next paragraph will be full of vitriol. Not for the Twilight series.]

Now, usually, I wouldn’t have even watched Vampires Suck to begin with. Like at all. And let me tell you why: I cannot stand Jason Friedberg and Aaron Seltzer’s movies. With the exception of this and (unfortunately) Spy Hard (gag me) I have never sat all the way through one of their movies. The last one I even tried was Epic Movie, and that crap was the last straw. If I was Queen of the Universe they would be publicly beaten as a warning to others and never allowed to come within ten miles of the creative process of a movie on pain of death.

Ahem. So you see why it would be noteworthy to me personally to not only finish this movie, but be willing to watch it a second time to fulfill the Mutant Reviewers requirements.

As for my feeling towards Twilight, I don’t hate it (Bella specifically I have issues with, but that’s something for another time). Being surrounded in a sea of various levels of Twilight fans, both family and friend, I’ve read a few of the books and seen the movies. So I am familiar with it, I can enjoy (even if not for the right reasons), and I can see why people are into it.

So when told, vehemently, that we would totally get the movie and have to see it, myself and one such fan friend decided to give it a shot.

Now, for everything I’m about to say, remember the expectations bar was set really low. Really, really, low.

As a spoof of the Twilight movies, Vampires Suck showed a lot more understanding of the subject and cleverness than any other of the Friedberg/Seltzer movies. And yes it felt like a dagger in my heart to type that. The references to the books, the poking fun at specific goofiness of the movies (the ‘contractually obligated to take off shirt bit’ made us laugh really loud), and even a couple of the eye-roll worthy silly jokes actually worked (the disco ball was pretty funny).

And casting for the three mains was spot on. Chris Riggi was perfect as Jacob and had really good comedic timing. Matt Lanter was Edward in all his sparkly constipated face glory. Jenn Proske is actually kinda spooky in how much she just nails the character, down to the -STOP PUTTING YOUR HAIR BEHIND YOUR EAR!- nervous ticks and fish gaping mouth thing.

Is it still stupid? Oh, yes. Yes, yes, yes. In fact, it’s so stupid, it should be spelled “stoopid.” But some of it is actually funny stupid, or maybe more stupid funny.

UNFORTUNATELY there’s all the other stuff. While it is minimized, much like dogs returning to vomit, still present is the unnecessary (and really not funny) crude humor, the not only already dated but expired popculture references, and dumbness (which, unlike stupid, is never funny). Any scene with Diedrich Bader was kinda cringe worthy. And all other vampire references were incredibly lame. The Alice in Wonderland thing kinda made me want to kill myself with how NOT funny it was.

So, in summation, about 90% of the jokes still fell flat, making Vampire’s Suck only vaguely entertaining. Only about 2% is actually memorable. If you don’t know anything about Twilight, you won’t get any of what’s going on. You definitely want to watch it with others, preferably Twilight fans with a sense of humor, or who hate the movies for not being the books.

Friedberg/Seltzer are still on my list of People I Can’t Believe Are Allowed to Share My Breathing Air, and I feel incredibly dirty that I even found this movie watchable.

Please forgive the ambivalence of this review.

Team Edward: Edward, we love you. You’re the best.
Team Jacob: No, Jacob’s the best!

Edward Sullen: Every time I bring a girl over, you try to eat her! It’s not fair!