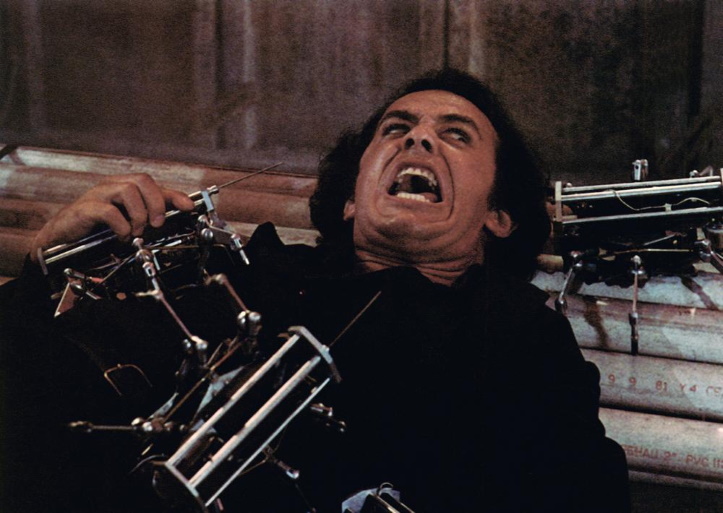 “Congratulations, guys, you just staked out a roll of toilet paper.”

Tagline: IT IS THE FUTURE. Machines are being programmed to turn against us. Someone must stop the madman who started it all.

Summary Capsule: Robot cop (as in, a cop who monitors robots, not RoboCop) uncovers a dastardly plan to give KISS a boost in ratings

Justin’s review: For the longest time, the only thing I knew about this movie is when I saw a snippet of it on TV back in the ’80s, at which I got freaked out over the robotic acid-injecting spiders.  So Runaway became “that robo-bug movie” that I steered clear of.

But Tom Selleck’s moustache beckoned, and I knew I could not stay away forever.  Actually, let’s start with Selleck, if that’s OK.  I guess I never understood what made him so popular.  Sure, he’s hunky and cool and you wish you had him as an uncle, but his method of acting is so low-key — even when he’s riled up and upset — that I never bought him as anything but a suave guy who sauntered onto a film set and pretended like he belonged there.  He was sizzling in the ’80s, had a brief flare-up of popularity with a stint on Friends in the early 2000s, but these days he and his lip caterpillar are a relic of magazine centerfolds gone by.

So Runaway was supposed to be a major blockbuster hit in 1984, and if you look at it objectively, it certainly has all the ingredients: major star power, robots, and scifi (which were both big in that decade), Michael Crichton directing and Jerry Goldsmith composing, and a hefty amount of promotion.  And it got absolutely creamed when it went up against a little underdog flick known as The Terminator.  Robots met cyborg, and Arnold was the one who walked away from that fight.

Even if James Cameron’s breakout hadn’t been involved, I’m not sure how successful Runaway would’ve been anyway.  Selleck doesn’t really radiate “awesome action hero” any more than villain Gene Simmons radiates “take me seriously and stop trying to picture what I look like with makeup.”  Plus — and this is important — the robots the entire film centered around looked like homemade toys.  They looked sort of practical, sure, but by then we’d already seen R2D2, Transformers, HAL9000, Bishop, and other, much better ’80s bots.  Even the robotic spiders that freaked me out as a kid now lack the threat factor that made anyone in the audience doubt they could take one on.  Honestly, they looked like display models that were running low on batteries.

So the movie is set in the near future that looks identical to the ’80s except that robots are everywhere and nobody seems to give them much thought — except, of course, when they go berserk and maim humans, which happens at a ratio of one “runaway” robot to two good robots in this film.  Runaways are handled by Tom, his moustache, and his new partner-slash-love-interest-slash-hairdo.  For some reason not well explained by the movie, even though robots have saturated society, apparently police work relating to them is considered disreputable.

Anyway, Tom finds out that Gene Simmons is altering robots to turn on their masters and may even have a couple secret weapons up his sleeve.  Naturally, the police chief doesn’t really support Tom in what is probably his first real case of his career, but that’s because ’80s movie police chief protocol dictated all the yelling and the “Your career is on the line, buster!”

While all of this could’ve been packaged into an intriguing movie, it really is quite dull in execution.  You just can’t take the robots seriously (and it’s actually funny to see Tom mince around them instead of walking up and just pulling their plugs), the action is too infrequent, and who arms cars with laser death rays for use on a public highway anyway?

It’s not that there’s no value here, it’s just that Runaway was already dated in 1984, and no amount of lip fuzz can overcome that fact.