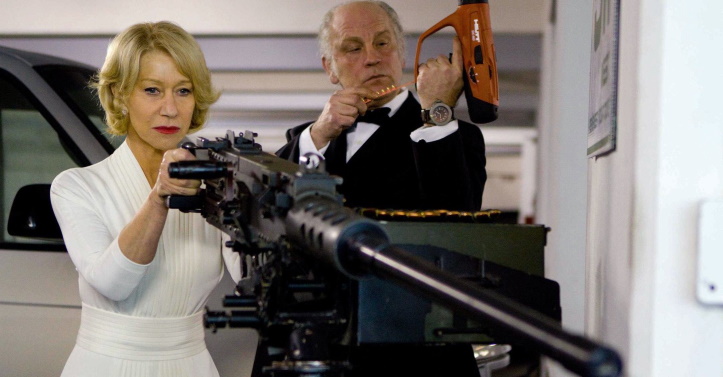 “I miss the old days. I haven’t killed anyone in years.” “That’s sad.”

Summary Capsule: An action romance comedy about the dangers of messing with retired trained killers.

Eunice’s rating: It’s like the cutest movie about retired assassins ever!

Frank Moses leads a quiet life. He has a sweet telephone only relationship with a customer service rep named Sarah, who has an even more boring life. It’s Christmas, and they’ve finally decided to take it to the next level and meet face to face.

Or it is until he single handedly takes on a team of operatives who break into his house and he not only opens a can but the whole case.

See, Frank is ex-CIA. But he wasn’t just any agent, he was a legend, and when he left was branded RED – Retired Extremely Dangerous. Now he has to figure out who wants him dead, but first he has to make sure Sarah is safe because anyone who has been monitoring his phone calls will know she’s special to him, and that makes her a target.

He basically kidnaps her, (but it’s the most cordial kidnapping ever he even vacuums!) and then begins the road trip movie as he goes to the only people he can trust, also retired agents from various branches and countries. All the while he’s chased by an ambitious young agent by the name of Cooper, who has enough old-fashion steel in him to make him a threat.

I wanted to go see Red, but was way too sick and completely missed it in theaters. Frowny face. It was definitely worth the wait, as it’s as close to perfect as I could’ve hoped for.

The first thing Red gets right, and so right it gets, is the cast. John Malkovich is equally comedic and insane, Morgan Freeman (could be in it more) is a man with nothing to lose and is bemused by the whole situation, Helen Mirren is the elegant hit woman, and Brian Cox as the former enemy who has nothing but respect and fond memories. But the most important casting is Frank and Sarah since they are at the center of the story. Mary-Louise Parker’s Sarah is the normal to everyone else’s… colorful. She has enough moxie to save herself, but not so much she’s irritating, she’s smart enough to know when she’s over her head, and she gets into the swing of things pretty quick. And Bruce Willis still makes a convincing action star/romantic lead with Frank being a nice balance of human weapon and hopeless romantic. Let’s just say, Bruce Willis is worth an eyebrow waggle in this movie. All the minor characters are perfectly cast too, I mean I could keep going.

The second thing is the action and fight sequences. Not filmed so dark, or the editing so spastic you can’t see, they’re creative and well choreographed and just look wow. Whether it’s Frank casually stepping out of a moving car or bullet vs. missile, you can tell each scene was thought out with a specific vision. The fight scene between Frank and Cooper is worth watching all by itself without context, it’s that good and may be my favorite part of the entire movie.

As far as story goes, it’s solid, but not all that new. Red may not reinvent the wheel, but it does the wheel right, with the romance(s) actually adding to the plot instead of being shoehorned in, and the ‘been there done that’ mentality of the main characters keeping things lighthearted and the violence “cool” instead of too much. And it’s clever, with smart humor.

Red is a great action movie (and I’d also suggest as a great date movie), which is more than I could say about some other action movies that came out last year *cough*The Expendables*cough* Just wish I could’ve seen it on the big screen. More of the frowny face.

Sarah: Did-did you vacuum?
Frank: A little, yeah. It was messy.

Marvin: Frank, I never thought I’d say this again: I am getting the pig!

Henry: I should tell you, there’s a new guy came down here yesterday looking for your file. Name of William Cooper?
Frank: 6’1″ cute hair?
Henry: Mm, hair was cute. *laughs* But I thought he looked a little tough though.

Frank: People get shot all the time.
Sarah: No they don’t, they get paper cuts.
Marvin: I mostly get shot.

Joe: Sarah, this is Victoria. Best wet work asset in the business, and a true artist with an RPN.
Sarah: What’s that?
Victoria: I kill people, dear.

Victoria: You’re all hard on the outside, but you are… you are gooey on the inside.
Frank: *gives a look*
Victoria: Gooey.

Marvin: I remember the Secret Service being tougher.
Victoria: Me too.