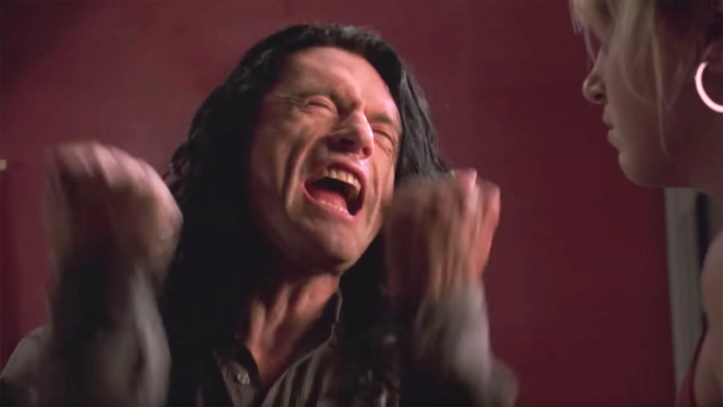 Tagline: A film with the passion of Tenessee Williams. (Yes, he misspelled Tennessee in the tagline)

Al’s review: The phrase “the worst movie ever made” gets thrown around a lot. Troll 2 receives plenty of love when this topic comes up. So does Batman and Robin. MST3K fans will likely point you towards Manos: The Hands of Fate or The Starfighters or Red Zone Cuba.  Our own little corner of the web has a long, proud history of kicking The Doom Generation violently in the crotch whenever possible.  For me, though, there is nothing is crazier, nothing more baffling, nothing worse than Tommy Wiseau’s The Room.

Acting? Writing? Directing?  They suck. You know they suck. Whenever someone labels a film “the worst movie ever made,” it’s a forgone conclusion that the acting, writing, and directing will suck. The Room doesn’t stop there, though, because -everything- about this movie sucks.  The ludicrous soundtrack. The crappy lighting. The stale sandwiches at the craft services table (probably). It’s all abysmally bad.  The way the characters talk.  The way the characters move. The tracking shots (which include no people and no dialogue).  Even the naked chick is terrible.  And I give a lot of latitude to naked chicks.

The plot (ha!) of The Room revolves around Johnny the creepy Euro guy (director/writer/producer Tommy Wiseau), his future wife Lisa, and the completely unrelated lives of their assorted friends and relatives.  See, Johnny is the nicest guy on the planet and is head-over-heels in love with Lisa. Lisa is bored with Johnny, so she schemes and manipulates her future husband while slutting around with his best friend, Mark.  And that’s it. It’s almost literally scene after scene of Johnny being obnoxiously sincere and Lisa being so cartoonishly evil that you expect her develop a Russian accent and start plotting the capture of moose and squirrel.

Along the way, we meet Johnny and Lisa’s orphaned neighbor Denny, who’s dealing drugs, and Lisa’s mother Claudette, who gets cancer, but don’t worry about it because neither plot point exists for more than a single scene before being completely forgotten about for the rest of the film. There are a few other cast members as well, my favorite being a man with no name who shows up about eighty minutes into our ninety-minute movie and is for some reason so emotionally invested in our characters that he does nothing other than make loud, excited pronouncements about how this situation is ruining their friendship.

Now, the thing you have to understand about The Room is that it’s not just a crappy indie flick churned out by a wannabe director.  Like all terrible movies worth their salt, this was a labor of love for Tommy Wiseau.  He poured his heart and soul and sweat and blood and tears into this movie.  You can tell he lost sleep over it at night.  He demanded the best from his actors and the best from himself.  You can see when he walks onscreen that he truly believes he is creating a modern classic of dramatic cinema.  His passion is infectious, and it turns The Room into something it shouldn’t have any right to be: amazing.

That’s right. It’s amazing. There’s no other word for it.  Traditional concepts of good and bad are made null and void in the face of The Room.  The critical eye is useless. Everything about it just becomes amazing. The disappearing cancer and the nameless, overly concerned friend? Amazing.  Playing football in tuxedoes? Amazing.  Tommy’s clearly-European-but-not-entirely-placeable accent? Amazing.  “Hi, doggie.”  Amazing.

So, yes, The Room is bad. There is no aspect to it that is anything other than astonishingly terrible.  But make no mistake: when I say “bad,” I mean “wildly, chaotically bad” and, when I say “astonishingly terrible,” I mean “rolling-around-on-the-floor-in-fits-of-uncontrollable-laughter.”  It’s a bad movie that doesn’t need a Mystery Science Theater audio track. It doesn’t need your snarky remarks or an elbow in the ribs from your buddy.  The Room stands on its own two feet as a masterpiece in its own insane little world.

It is the worst movie ever made.  And, just possibly, it is the greatest film of all time.

Everyone: Don’t worry about it.

Johnny: You are lying! I never hit you! You are tearing me apart, Lisa!

Mark: How was work today?
Johnny: Oh pretty good. We got a new client… at the bank. We make a lot of money.
Mark: What client?
Johnny: I can not tell you, its confidential.
Mark: Oh come on. Why not?
Johnny: No I can’t. Anyway, how is your sex life?

Mark: You don’t understand anything, man. Leave your stupid comments in your pocket!

Lisa: Did you get your promotion?
Johnny: Nah.
Lisa: You didn’t get it, did you?

Lisa: Do you want me to order a pizza?
Johnny: Whatever, I don’t care.
Lisa: I already ordered a pizza.
Johnny: You think about everything, ha ha ha.

Steven: When is the baby due?
Lisa: There is no baby.
Steven: What? What are you talking about?
Lisa: I told him that to make it interesting.