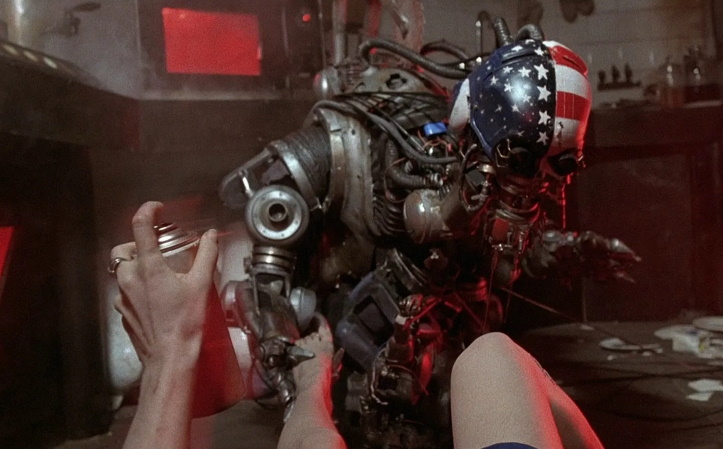 Tagline: It activates it exhilarates… it exterminates

Summary Capsule: A girl deals with a creepy rapist and an assassin robot all in the span of a day

Justin’s review: Hardware is an edgy scifi/horror film that bills itself as “the Terminator of the ’90s”, somewhat ignorant that Terminator 2, aka “the real Terminator of the ’90s,” was only a couple of years away.  Not to mention that Hardware’s claim lies only in the field of dreams where marketers frolic, as they assume that audiences will never take a chance on a movie that isn’t favorably compared to another, more well-known flick (aka “Die Hard on a [place/object]” syndrome).

Sure, Hardware is somewhat Terminator-ish – after all, it’s got a seemingly unstoppable killer robot who’s gunning for a lady with guts of steel.  But while Terminator had its cyborg sent back in time to assassinate the mother of the leader of the human resistance against the machines, Hardware is a flick where a guy just finds a broken killer robot and gives it to his girlfriend as a Christmas present (!), and is subsequently surprised that when it’s assembled and functioning, it doesn’t merely do his back taxes and play World of Warcraft.

It’s a coin’s toss whether you’ll like this film or not. It depends, I guess, on what you’re looking to get out of it.  Hardware has a great time constructing a dystopic-apocalyptic future where most of the earth is radioactive and the remaining inhabitants live inside dingy cities where an unseen “Big Brother” government controls their lives.  Everything’s grimy and deliciously retro-tech – more Alien and Star Wars and Blade Runner than all of the newer CGI vistas.

Even the villain, a self-repairing kill-bot named MARK 13 (named not because of its iteration, but for an obscure reference in the Bible), is all wires and gears and stabbity-things.  There’s a feast of morsels to be had, if one isn’t too particular about what else shares the plate.

I had heard great things about this film, and so I come away on the flip side of the coin – I really didn’t end up liking it too much.  Sure, the acting is sub-par (the lead lady cries so unconvincingly that I think she needs to take lessons from my infant son), and the action, horror and science fiction is presented more in random drabs than anything steady, but my main complaint is that whoever filmed this movie obviously did not want me to see a single thing in it.  It’s a visually dark movie, filmed so because I guess nobody in the future can afford sunglasses or can be bothered to open their shades.  As a result, my eyes felt strained an hour in just trying to make out what was happening.

Plus, there are pretty severe pacing issues.  The first half of the movie is so slow and meandering as to lose entire tour groups of watchers, who now and forevermore wander the labyrinth of malicious cinema editors.  When you’ve only got 93 minutes to tell a story about a complex stabbing robot, you don’t dither around with a love scene and a part where a guy in a taxi cab boat makes you listen to metal rock.  You get straight to the kill-bot by minute two, or you’ve lost my attention.  This isn’t even to mention how one guy dies because he’s injected with a psychotropic poison that leads us into a completely unnecessary hallucination sequence that just goes on and on and on.

And as for the infamous assassination droid?  Dude, you couldn’t even LEAVE AN APARTMENT.  I don’t fear anything that has difficulties going for casual strolls around the neighborhood.

Bah.  I’m in a bad mood now.  Someone make me cookies, stat!

Shades: It’s my heart – it feels like an alligator.