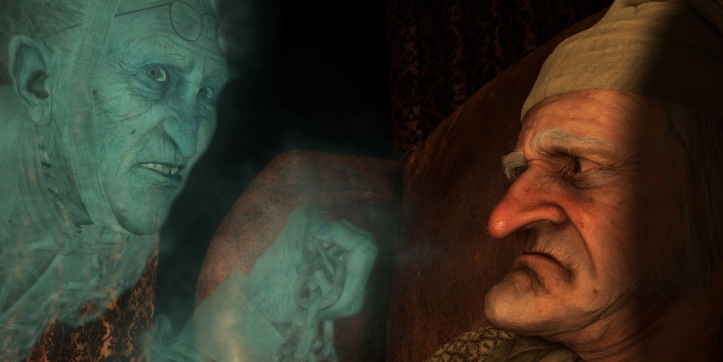 “There’s more of gravy than of grave about you!”

Kaleb’s rating: ‘Twas several days before Christmas, and all through the theater… yeah, I can already tell that’s going to be cumbersome and stupid.

Kaleb’s review: Let’s try the direct approach: During my sister’s holiday visit, she and I and the folks all decided to be all family-like and sojourn to the movie house.  This required resolving the extremely minor conundrum of finding a movie we were all interested in (I and other members of my family are quite notorious for being fiercely agreeable).  We quickly narrowed it down to three:

The Blind Side succumbed peacefully to General Shrugging Disorder (more commonly known as The Somewhats); we were all vaguely interested in it, but none of us were enthralled.

Mom and dad were vocally not-interested in Avatar, my sister’s interest was of too low a key to detect, if it existed at all, and my own was limited to morbid curiosity.  Pass.

That left A Christmas Carol — the 999th adaptation of Dickens’ timeless yuletide ghost story (When we hit 1,000, the world ends.  Careful.) — which was itself depending heavily on morbid curiosity, but with a Christmas modifier, giving it a +2 to Us Watching It (NERD!)

Something you need to understand right off, and that I’m sure has been mentioned in other reviews: This is not a comedy.  Oh, there are funny moments–some if not most of them a tad forced, I’m afraid–but don’t make the mistake of thinking, “Jim Carrey is in it, ergo, it is laugh times!”

And yeah, I know it’s been years since that was even a legitimate assumption; I’m warning you because the trailers seem to present it as a comedy.

And it’s a good thing that it isn’t, because to be such would mean forfeiting its strongest point: faithfulness to the source material.  Tiny Scrooge segment notwithstanding (which I thought was a tad weird and unnecessary), this particular adaptation doesn’t take a lot of liberties.

All in all, it’s a fun, visually-novel** roller-coaster of a thing, and I mean that in the near-literal sense.  It’s less of a movie and more of a macabre theme park ride, with the camera almost incessantly careening over the roofs and spires of London and even through the very fabric of time and space and whatnot.

Bit of a warning, there.  If you get motion sick at all, and plan to see this movie in theaters, plan again.  It will quease you like a hurricane.  If you see the 3D IMAX version, you will actually barf out your own skeleton.

All said, I think we made the right choice.  I recall reading another review, that said something along the lines of “Finally, after 998 inferior dreck wafers, the messiah is upon us!”  And while I wouldn’t go that far, I did enjoy meself, and will probably look for this one when it comes out on DVD.

Besides, it’s just as well that we didn’t see Avatar, as I had already decided ahead of time and sight-unseen that any review I did thereof would almost certainly be naught but a creepy and alienating Irritated Anime Geek diatribe about the process for creating a “proper” catgirl.

*Yeah, I’m pretty much the worst person ever.  Made moreso by the fact that ol’ Chuck is purportedly a distant relative of mine.  I can’t prove it offhand, and I’m somewhat dubious myself, but that’s what I hear.

**Not “stunning”, as a fair quantity of other reviewers might rightly say.  I find myself strangely mindblow-resistant when it comes to Performance Capture.

Scrooge: If I could work my will, every idiot who goes about with ‘Merry Christmas’ on his lips should be boiled in his own pudding, and buried with a stake of holly through his heart!

Marley: You don’t believe in me.
Scrooge: I don’t.
Marley: Why do you doubt your senses?
Scrooge: Because a little thing affects them. A slight disorder of the stomach makes them cheats. You may be an undigested bit of beef, a blot of mustard, a crumb of cheese, a fragment of an underdone potato. There’s more of gravy than of grave about you!